Christmas was still nearly two weeks away. But judging by the excitement of Kim Fisk’s two daughters, you might think Santa had just made an early delivery to Cedar Trails Elementary School.

Nearby, her 8-year-old sister, Kendell, dug into a bag of books. “I like this book!” she piped. “My teacher read it to us.”

Fisk smiled as her girls sorted through a large assortment of toys, books, games and blankets in the school

foyer. The contributions from teachers, students and parents helped ease the sting of losing everything she owned in a fire a week earlier.

Third-grader Kendell’s school, Beach Elementary, also pitched in to help the family recover, as have community residents, organizations and businesses. As devastating as the Dec. 4 fire was, the community’s generous response has been deeply moving, Fisk said.

“There are strangers coming up to me giving us donations and I don’t even know who they are,” Fisk marveled. “The generosity of people and the kindness is almost overwhelming sometimes.”

“That’s what’s so nice about living in Cedar,” Duffy said. “They don’t need to know who you are. They’ll help.”

School and Community Come Together

The fire destroyed the mobile home at 2280 18 Mile Road, where Fisk lived with her daughters and boyfriend. 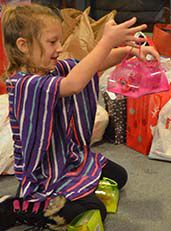 Solon Township firefighters responded to a call reporting the fire at 9:39 a.m. that Wednesday, but found the structure already a total loss when they arrived minutes later.

Fisk said no one was home when the fire broke out, adding she is grateful that she was at work and the girls at school.

“It could have happened in the middle of the night,” Fisk said. “We could have all been gone or I could have lost my children. I’m not worried about what I lost, because I still have them.”

Still, the family lost everything but the clothes they were wearing, and Fisk had no insurance. She and her daughters moved in temporarily with her parents in Grant.

The girls’ schools quickly went into action. Staff at Cedar Trails and Beach collected funds to provide gift cards for food, gas and Christmas shopping. At Cedar Trails, donations included educational activities and other “things for (the) girls to do to keep their minds off the tragedy,” said Audrey Debri, Lonnitta’s kindergarten teacher.

“People I don’t even know have been dropping things off to the classroom,” Debri added. “The whole school’s kind of coming together to help them.”

Best Gift of All 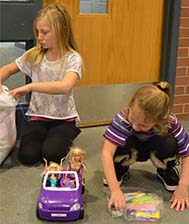 Meanwhile, Kim Fisk said she is saving money to move into a new home, helped by an account established for donations at Choice One Bank in Cedar Springs. Beyond the much-needed material support, the generosity shown by school, community and her employer, ITW Dahti Seating, lifted her spirits as Christmas approached.

“I focus on my kids and that’s all I can do,” she said. “I’m just trying to focus on the good, not think about the bad, make sure my kids have a great Christmas and move on.”

As for all the belongings destroyed in the fire, Fisk tried to keep it in perspective.

“You don’t think as much about what you lost when you’ve got so many people that are there to help you,” she said.

At this school, gym class is no longer one size fits all