Byron Center Graduate Won’t Let A Stroke Slow Him Down 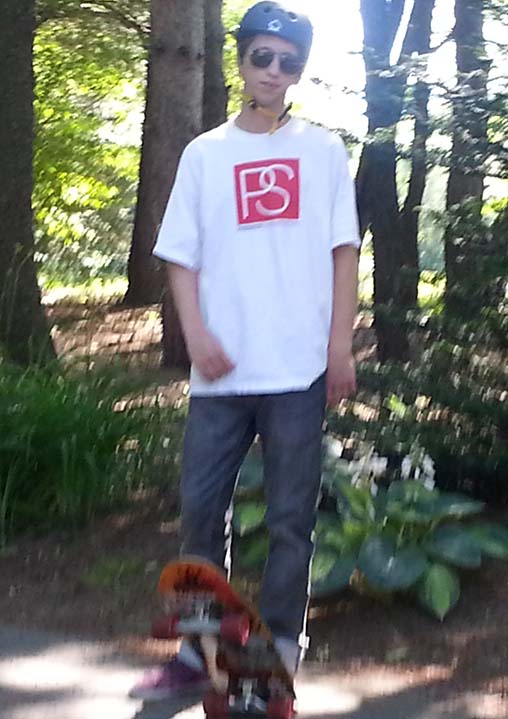 Byron Center High School Class of 2013 senior Chris Schmitt wrote a quote for the senior yearbook. “You can’t alter the past, but you can change the future.” Chris’ journey to graduation day has been remarkable, say his parents and the educators who have guided him in reaching his goal to graduate in four years following a major stroke and brain surgery in eighth grade. “Keep moving on,” Chris said to explain the quote further.

The message means a lot coming from Chris, 18, who literally had to relearn everything after he collapsed in the shower in December 2008. The stroke he had suffered leading to the collapse was only the beginning of a series of events. While staying in the hospital, he had a second stroke and his brain swelled, requiring emergency surgery to remove a bone from his skull. He was in a medically induced coma for weeks.

A lot was uncertain and doctors didn’t know the extent to which he would recover. After awakening from the coma, he spent weeks in rehabilitation, undergoing intensive therapy.

“I had to relearn everything as I hadn’t even been able to hold up my head, move my right side, speak or even swallow. After 10 weeks, I walked out of the hospital with the use of a cane,” Chris wrote in an essay for the 2013 GRBS Perseverance Scholarship, which he was awarded from GRBS, a Grand Rapids-based custodial cleaning company.

Chris started high school part-time the following fall, nine months after the stroke occurred, while continuing outpatient physical, occupational and speech therapy. He had difficulty concentrating and with fatigue, while also struggling to catch up with material he missed. Setbacks have included four seizures.

His teachers and family expected that he would take five years to graduate.

“Through determination and hard work, I have proved them wrong,” he wrote in the essay. “I was determined not to let my struggles interfere with my plans of when I would graduate.”

By attending summer school and taking online classes, he achieved his goal of graduating with his class and plans to attend Grand Rapids Community College in the fall to pursue a criminal justice degree.

“We didn’t know how he would do going back to school. We just tried to get all the safety nets in place so he could,” said mother, Laurie Schmitt.

While he still struggles with physical and speech disabilities, Chris now grabs his skateboard and smoothly cruises. He recently went parasailing, swam in the ocean and climbed a waterfall in Jamaica with his family. He has gone zip-lining, ridden in a helicopter, and loves boating. Another major goal he achieved was receiving his driver’s license.

“All of these physical difficulties have given me a greater sense of perseverance. I have had to work so hard to overcome the difficulties and relearn everything. Moving forward, I will face life with the same attitude: willing to work hard in order to overcome any situation I may face,” he wrote.

“He just set a goal and if he came up to an obstacle, he would work out a way to overcome it,” Michell said. “For me, it’s inspiring. I use Chris as an example for other students when they have a little complaint. It just puts life in perspective.”

Chris’ parents, Laurie and Gary Schmitt, said his attitude has been impressive.

“It was a big relief to get him through that, but he did it in four years,” said Gary. “We’re very proud of him.”