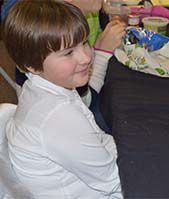 Wealthy Elementary School students took a virtual trip to a land of kings and queens, haunted castles and legends, complete with treats and a look at the mystical country’s flag and history.

The 36 fourth- and fifth-grade students studied Croatia during the school’s recent cultural luncheon, learning details of the small European country made up of 1,246 islands.

“Every island has a story of how it started,” said Zarisa Gummere, who came to the United States from Croatia as a college student in 1994. Gummere’s daughter, Audrey, is in third grade at Wealthy Elementary.

The monthly luncheons, an idea of the school’s Cultural Ambassadors parent committee, introduce students to countries native to families in the school. Students have explored Mexico, Germany, India, China, Japan, Sweden, Lebanon, Israel and England. The next luncheon will focus on Brazil.

The goal is to develop knowledge and encourage appreciation of different cultures and countries. Principal Anthony Morey said the parent committee recognized the benefits of learning about ethnicities represented at the school and developing an understanding of the world.

“Over the course of fourth and fifth grades, all students will have attended six or seven luncheons,” said Morey. “Long-term, the goal is to make sure all our classrooms and students are globally connected.”

Gummere wrote children’s names for table seats in the Cyrillic alphabet, and Audrey passed out Croatian chocolates and candy. Gummere told students of Croatian natives like legendary explorer Marco Polo and engineer Nickola Tesla, traditional foods, currency and the haunted island of Lokrum, where because of a long-standing curse nobody dares sleep there even today. “My Audrey still doesn’t want to step on that island,” Gummere said.

Croatia is now a major tourist destination, welcoming 11 million visitors last July and August. The island Dubrovnik is considered the pearl of the Adriatic Sea.