Delicious Ethnic Dishes Make for a Great Day at School

Families from all corners of the map come together as a school community at Southeast Kelloggsville Elementary School, and, recently, their favorite dishes created a smorgasbord of ethnic delights.

Pierogi, curry chicken, plantains, fry bread, corn sticks and Spanish rice were among many foods dished out for tasting during the fourth annual International Food Day at the third- through fifth-grade school.

Ethnic flags decorated tables as students’ parents served their favorite foods and shared customs. The message: Food is a source of pride and means for celebration no matter where someone is from.

“We have such a culturally diverse population of students here, we wanted to celebrate that,” said Principal Paula Dykstra, who organized the day.

It’s a way to honor people’s roots, said Virginia Tummelson, the school’s community liaison. “The response has been bigger and bigger each year,” she said.

A Variety of Tastes

Parents of students brought foods traditional in Albania, the Netherlands, Poland, Mexico, Puerto Rico, Vietnam, Honduras, Guatemala, the United States, Jamaica and many others. Even the Karen state of Burma was represented with a native dish of chicken and rice.

“It brings us together and makes us realize we are all different but all working together for the kids,” Tummelson said. 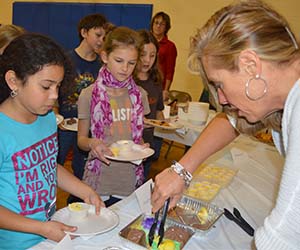 Juan Castro and Johanna Santiago represented Puerto Rico, serving Spanish rice and corn sticks. “It is good to see the flavors of different countries,” said Juan, who moved to the United States in 2008.

At the Polish stand, Scott DeGraff, father of fifth-grade student Aden, shared venison kielbasa. He said he wanted to give students the opportunity to try something new. “A lot of them don’t get exposed to this stuff,” he said.

Evelyn Van Popering stocked her Netherlands booth with Edom cheese and Wilhelmina peppermints. “It’s nice to see the variety of ethnic groups in their school and what food is from what country,” she said. Van Popering’s

daughter, Cindy Wolters, is a fifth-grade teacher at the school.

Fourth-grade student Giovani Aguirre sampled tamales and cheese. “When you try it, it makes you want to be there,” he said.