EGR Pioneers Support Be Nice through Hearts of Gold game 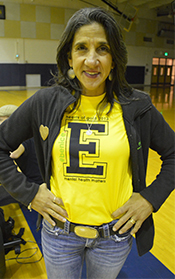 “Be Nice,” may not be the typical message coming from the stands as football players head to the field to face off against a rival school.

But it was Oct. 25 for the East Grand Rapids Pioneers as they battled Forest Hills Central High School. T-shirts, posters, banners and more shared the simple message: Be Nice.

The Mental Health Foundation of West Michigan was the chosen recipient for the Pioneers’ annual Hearts of Gold fund-raising game. The foundation’s Be Nice campaign is seen at many area schools. It educates people about mental well-being, anti-bullying and the importance of treating each other with civility. Dozens of schoolshave started leadership groups, held assemblies or hosted workshops centered around Be Nice. The goal is to minimize and reduce the devastating effects of bullying, such as depression and suicide.

“We wanted to keep our theme ‘playing for health and happiness’ and could not think of a better recipient than the Mental Health Foundation of West Michigan,” said Natalie Bernecker, an East Grand Rapids parent involved with Hearts of Gold. “We want to raise awareness and funds to let people know that mental health matters and is important to the health and well-being of our students.”

Senior Peter Stewart, the football team’s quarterback, said Be Nice has had a positive impact on the high school. Sportsmanship, playing fair and working as a team are ways it translates to the field. “I believe Be Nice has changed the culture of our school,” he said, “It’s created a positive attitude, and everybody feels like they belong.”

Being nice has a huge impact on making a difference in people’s lives, said Christy Buck, executive director of the Mental Health Foundation of West Michigan. “Ultimately, how people treat each other has an effect on how people think, act and feel,” she said.

Hearts of Gold began in 2009 when the EGR football team wanted to make a difference after a former EGR student passed away from childhood cancer. The team decided to play a football game to benefit Helen DeVos Children’s Hospital. “It’s a different atmosphere than another game. You are playing for a bigger purpose,” said Connor Conoboy, a senior football player. 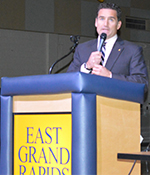 Since 2009 more that $215,000 has been raised, Bernecker said. Lemonade stands, pop can returns, T-shirt and jerseys sales are some of the methods used, and the money helps fund assemblies and workshops. “The idea behind the fundraiser is that each person and child can make a difference,” Bernecker said.