Kaylee Diamond sized up the strange sculpture of tangled twigs and flowers, trying to describe it to a visitor. “It kind of looks like a whole bunch of nature that people put together,” Kaylee said. “A hut of nature.”

That about sums up the piece of wild art that Kaylee and her fellow students constructed on the front lawn of Cherry Creek Elementary: a hut of nature.

Inspired by their school’s week of promoting health, about 125 Cherry Creek fifth-graders created their own version of ArtPrize using items culled from a nearby woods and their yards at home.

Pine cones, dried flowers and shapely twigs were tied together into tiny teepees and dangling ornaments. It all made for an eye-catching art work, something only a summer storm or children’s imaginations could create.

“I just like it because we randomly put it together, and now it looks pretty cool,” said Josiah Koster.

It fit well into the theme of “Champs on the Run,” Cherry Creek’s week of fitness-enhancing activities, said Principal Shelli Otten. “This is about turning off the electronics, going into nature and finding things of beauty,” Otten said. “Giving a gift of art back to nature.”

The project was organized by Cherry Creek teacher Gene Ellens and based on the work of Andy Goldsworthy, a British artist who makes art from the stuff of nature. Using rocks, ice, leaves and other materials, Goldsworthy “creates outdoor sculpture that manifests, however fleeting, a sympathetic contact with the natural world,” his Web site says. 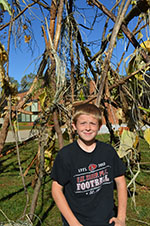 ‘It Started From Three Sticks’

Ellens has created similar sculptures with fifth-graders on annual school camping trips in years past. When the trip was canceled this year, he said, a parent asked if Ellens would create one at the school.

It’s a joy to see students take an interest in the veins of leaves and make their own little mobiles, Ellens said. “They respond to the texture, to the material,” said Ellens, who’s taught here 18 years. “All I have to do is start it and guide it, and they’re just like worker bees.”

Students studied Goldsworthy’s work then went out to find art supplies in the woods and fields, while Ellens brought some of his own. For two hours a day over one week, they stuck sticks into the ground, strung flowers and lashed it all together.

As Kaylee said, it took a lot of compromise and cooperation. “It started from three sticks, then everyone just started building on,” she said.

Asked what it reminded them of, one student said a jungle. An old Indian hut, said another. Others said a Christmas tree and a bunch of wooden ladders.

“It kind of reminds me of a mountain of chimes,” Travis Harvey chimed in. 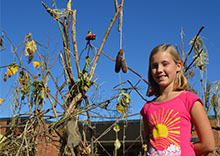 How long will it last? Shelli Otten wouldn’t tie it down to a timeframe. “We’re going to enjoy it for awhile and return it to nature,” she said.