For Katelyn Bowman, College is a Glass Slipper 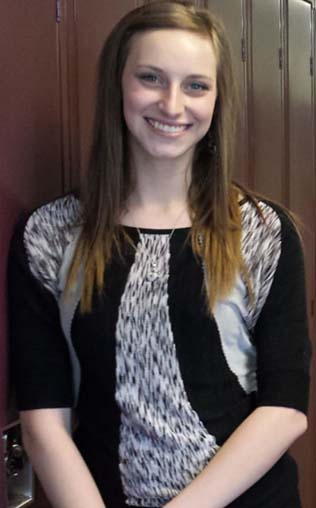 Katelyn Bowman loved Cinderella. As a child she watched the movie over and over, and wore her Cinderella costume every Halloween.

It’s no mystery why Katelyn identified with hard work. “She was like the house maid,” says the Kenowa Hills High School senior. “She was taking care of stuff and that’s how I am now. Isn’tthat weird?

“I feel like I’m ready to meet my Prince Charming and go,” she adds with a snap of her fingers. Katelyn is going, all right, but needs no prince to save her. She’s on her way to college and a nursing degree after she graduates May 29.

That day will be more than the usual graduation jubilation for the animated 17-year-old.  It will signify her vanquishing the health and financial problems that have beset her family since she was born the surviving twin of a premature birth.

Since then, she has overcome a host of challenges: her own medical issues, divorced parents, her mother’s bouts with cancer and several home address changes due to limited income. Katelyn struggled academically while tending to her mother’s needs and helping to raise her younger sister.

But she will graduate with solid grades, a nurse’s assistant certificate and a heart on fire for college. “On a scale of 1 to 10 on the excitement scale, I’m a 20,” she says. “You have no idea.”

Katelyn’s life to date has been largely defined by the severe health problems of her mother, Paula Hilliard. Those include multiple bouts of cancer, a stroke, chronic migraines and a back ailment. A former nurse, she is unable to work and receives disability payments.

With limited income and two other children, Hilliard says she tried her best to provide love while going without internet and TV. Katelyn has been a wonderful daughter and a great older sister to her other daughter, Marisa, she says.

“I’m just so proud of her,” Hilliard says. “I hope she can get a good job and have more things than I offered her.”

Katelyn speaks highly of her mother, who coached her in softball and basketball and taught soccer to her and her older brother, Trey. “My mom tries to make us so happy and give us what we would like,” Katelyn says. “She wants us to feel cared for and loved.”

Katelyn reciprocates by cooking and doing laundry when needed, buying flowers for mom to plant, and helping little sister Marissa with her homework and hair.

Still, she admits that it was tough to not have enough money and move so often. “Studying was something I really lacked in because I was worried about what was going on at home,” she says.

Her family’s financial struggles are not unusual among Kenowa Hills High School students, Principal Katie Pennington says. “Despite her circumstances, she just kept persevering,” Pennington says. “I think we’re all proud of her.”

That includes science teacher Cheryl Kloet, who bought Katelyn a dress for her sophomore swirl dance. She admires how hard Katelyn has worked through tough times. “She may not have been a 4-point, but she was motivated to do her best,” Kloet says. “It was not easy.”

Katelyn says her difficulties taught her to “never (let) anything get in the way of what you want. It made me a stronger person.” After a rough first two years of high school, she buckled down academically. She recently earned a nurse’s assistant certification from Kent Career Tech Center. She wants to be a neonatal intensive care nurse and has applied to work at an assisted living center.

For now, she plans to go to Grand Rapids Community College, from which she already has earned credits. But first, there’s graduation day and level-20 excitement.

“I have a long ways to go,” she says optimistically. “I’m ready just to kick it out and do it.”