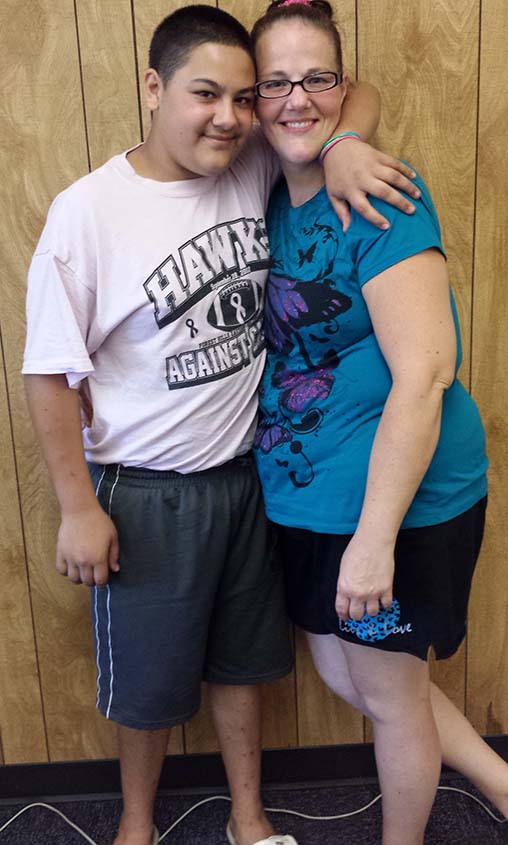 Caleb Cruz gazes at a computer screen showing a cartoon guy making sub sandwiches, taking orders by phone and frantically falling behind.  “Looks like our friend could use a little help,” says the narrator, as a graph comes up showing Caleb how to calculate cost of each sub. “Do you see how using symbols can make things easier?”

But it isn’t easy for Caleb. That’s why the middle school student is here at Cedar Springs’ Red Hawk Elementary School, taking an online math course he was unable to pass during the school year. Fortunately, Caleb is getting a little help from his mother, Angela Heugel. And they have both gotten help from the Kent School Services Network (KSSN), a countywide program that brings social and medical services to students’ schools and homes.

The KSSN program operates at Red Hawk and Cedar View elementary schools and Cedar Springs Middle School and, as of this fall, Cedar Springs High School. More than 200 students and families received services in the 2012-13 school year.

For Caleb, who is entering eighth grade, KSSN provided weekly meetings with a therapist who helps him with cope with depression and attention deficit hyperactivity disorder. It’s also helped Angela, a single mother of twin boys, who meets with Caleb and the therapist every other week in her home.

“It’s been helpful because I didn’t know how to deal with a child with ADHDH,” Heugel says. “His and my relationship has gotten stronger since he started doing that.”

The challenges families face in Cedar Springs are in some ways similar to their urban counterparts: poverty, homelessness, inadequate health care. But in a rural district covering 110 square miles, transportation to school and social services also is a big problem for many. There is no public transportation and some families don’t have reliable cars.

“It’s a huge, huge issue,” says Jennifer Willette, a community school coordinator formerly at Red Hawk and now at the high school. “We have folks that don’t have a lot of money trying to get places.”

That can make it tough for families to attend parent-teacher conferences or other school events. It can also make it hard for students to get to school, and on time, especially in winter when side roads aren’t passable.

Further, many families either can’t or don’t want to drive into Grand Rapids for services unavailable nearby, such as medical and mental health care and financial support systems.

Resources vary widely in a district that encompasses both low-income and more affluent families. Some students can work online at home, while others like Caleb lack internet access. Some live in comfortable houses, others in mobile homes. Some double up with other families because theirs was evicted or their homes foreclosed.

And when families need help, some are reluctant to ask for it, Willette notes. “There’s a lot of pride up here,” she says. “People don’t want to say, ‘We’re homeless. What’s out there for me?’ ”

She and the other coordinators work to advocate for and connect parents to services that will benefit their family and help their children succeed in school. That means “just being a welcoming voice, saying here I am to support you,” says Jodi West, community school coordinator for the middle school.

Depression and anxiety are frequent problems for students, as are family issues such as abuse, neglect and divorce, KSSN officials say. Therapists meet with students at school, and sometimes with them and their parents at home, providing services many probably would not seek out otherwise.

Support takes other forms through KSSN: free tax-return services for parents, hearing, vision and dental services for students and two nurses on site. The EnGedi Youth Center, a church-based nonprofit partner, provides after-school and summer programs for middle and high schoolers. Jet’s Pizza chips in everything from pizza to backpacks.

Although school officials have documented some improvements due to KSSN, such as higher attendance and lower failure rates, other changes are not so neatly measured. Ivy Kowalski, community school coordinator for Cedar View Elementary, says just encouraging students as they pass in the hall means the world to some. “That (does) wonders for rapport with the kids: ‘Wow, someone’s noticing I’m in school today, and it’s not because I’m in trouble,’” Kowalski says.

Jodi West tells of an eighth-grader struggling with depression who wrote all over her body with magic markers. By the end of the school year, the scribbles were gone and her attitude was up, West says: “She said, ‘It’s a new me. I’ve really turned my life around.’ “

Angela Heugel calls KSSN a “wonderful” program, which her other son, Alex, also has begun utilizing. She says regular meetings with a therapist have helped Caleb manage his behavior and helped her be a better mother.

“She knows what I’m going through, so she gives me some really good hints in how to deal with him,” Heugel says. “Our relationship has changed because I’ve changed the way I deal with it.”

Link to Chart Showing Improvements Within Schools Since KSSN’s Implementation

Six feet apart, but closer than ever

Six feet apart, but closer than ever

When the virus forced educators to change course, one Lowell teacher found a way to keep building community despite social distancing. Andrew Sargent shares his “Lessons of the Pandemic” story with SNN...