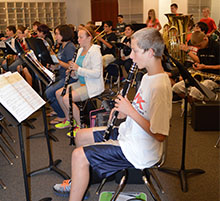 “There’s our tempo, arms are up, one, two, ready and…”  said Jonathan Schnicke, as the Kent City middle school band began its melody. Schnicke recently took his spot behind the podium of the middle school and high school bands andchoirs. It’s a return to the classroom for Schnicke, a 14-year band and choir director at Belding High School who spent the last two years as a Portland Public Schools administrator.

“I absolutely love the interaction you can have with kids on a day-to-day basis,” he said. “This was a great opportunity to get plugged into a great community.”

Schnicke said former director Melissa New, who served in the position for two years, and before her, director Jim Davis, built a quality program. He wants to continue its growth.

Interest shouldn’t be a problem – 100 percent of last year’s ninth through 11th graders who were in the band returned to play on the 82-member high school band this year, and 130 students are in the middle school band.

Kent City High School’s marching band is a member of the Michigan Competing Band Association.  The high school’s class size of 348 puts it in the Flight IV category for schools with up to 728 students, which means be competing against schools twice their size. Competitions take place every weekend in October. Schools that qualify for the state championship will compete Nov. 2 at Grand Rapids Community College’s Ford Fieldhouse.

“In the history of the group, they have made it to state finals three times, last year for the first time in six years,” Schnicke said. The band finished 12th at the state championship.

“It’s been continually getting stronger,” Schnicke said. “The kids in it are very committed.

Junior Parker Fritz, a saxophonist, said he’s enjoying the program. “It’s a lot of fun. All the members are like a family. It’s a great place to try to increase your musical ability,” said Fritz, a band member since sixth grade who now assists with the middle school band.

At Belding, Schnicke led a strong program known for show bands and often placed in the top five at state finals, he said. Schnicke said his goal at Kent City is to expand students’ musical horizons. “For me, it’s about stretching what we are doing in marching band each year,” he said.