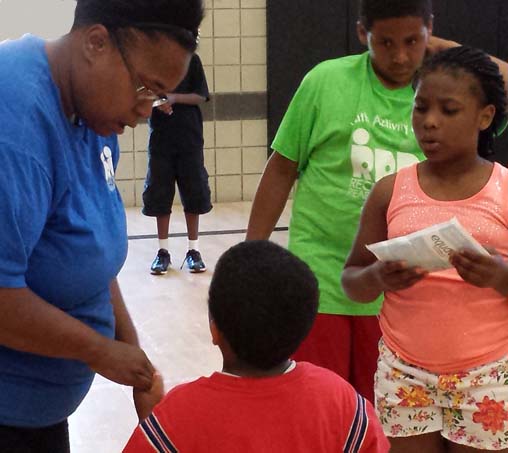 When Kenyana Gary brought her children to Sibley Elementary School two years ago, she had just been laid off from her job, recently divorced, and Christmas was coming. She wondered, “How am I going to provide for my family?”

She didn’t want charity. But when a teacher called with concerns about her son’s school performance, Gary learned there was a world of help right there at school. It was called the Kent School Services Network (KSSN).

One by one, her family’s needs were met: backpacks, pencils, a Thanksgiving food basket, Christmas presents in exchange for volunteering. Soon she found job opportunities at Sibley: in the after-school program, as a bus aide, a recess aide, a child-care provider for parents learning English.

Before long she was spending more time at Sibley than her two children were. Meanwhile, her son, Keyon, improved his reading and math with help from college tutors.

“Sibley really helped me get back on my feet, so I want to give back as much as I can,” Gary recently told about 50 educators and professionals visiting the school. “This is where I’m supposed to be.”

Testimonies like hers have helped make Sibley and other KSSN schools a statewide model for bringing an army of services and partners to bear on the challenges of disadvantaged students and families. The result:

“We couldn’t be more proud,” said MaryAnn Prisichenko, who recently retired as Sibley’s principal. “The results are there.”

Sibley School is one of 23 schools in seven Kent County districts in the Kent School Services Network. Their success has inspired a similar statewide program called Pathways to Potential, begun last year and now in 124 schools.

Gov. Rick Snyder touted this community initiative during a visit in January. More recently, representatives of the governor’s office, the Michigan Department of Human Services, and Detroit, Pontiac and Saginaw Public Schools visited Sibley and Harrison Park School. Both have been KSSN schools since the program started in 2006-07.

Zak Tomich, deputy director of strategy for Snyder, said he was impressed with the “hard work and collaboration” of the Sibley staff and community partners.

“(We’re) just trying to demonstrate this to the schools that are interested, and communicate about the success here to schools that don’t know about it,” Tomich said. “It’s very exciting.”

“If parents are able to access services at the school they’re more likely to be involved in the child’s education,” Paine-McGovern said later.

Concentrating services in one place

KSSN is a community school coalition, supported by local foundations, service providers, the schools, the county and business/faith partners (www.kentssn.org)

At Sibley School, about 85 percent of its 480 students are ethnic minorities, including many immigrants for whom English is a second language. More than 90 percent qualify for free or reduced lunch. Over seven years it has built a powerful network of agencies and allies, behind a staff that includes two Department of Human Services caseworkers, a nurse and a mental-health clinician.

Sibley’s many partners include Spartan Stores, Boys and Girls Clubs, First Evangelical Covenant Church, which provides tutoring and mentoring, and The Other Way Ministries, which offers a food pantry and a reading/literacy program for students and their parents. Keystone Community Church provides funds and volunteers for the reading program, which ties vocabulary learning to field trips and gives parents rent or utility vouchers for participating.

A combination of incentives and interventions has dramatically boosted attendance at Sibley – one of the key aims of KSSN schools. Chronic absenteeism – more than 20 missed days – fell from 26 percent in 2006-07 to 12 percent in 2011-12. This past school year, about 250 students per month had perfect attendance, officials say.

“All kids know their attendance is a big deal,” said Sergio Cira-Reyes, community school coordinator. “Anybody coming to Sibley knows that’s what we do. You’ve got to be here on time and ready to learn.”

A program called Signals for Success has proved a magic bullet for attendance. Parents receive color-coded notices about their students’ attendance record. A green light qualifies them for benefits such as holiday food baskets or winter coats; yellow is a warning to call the school; red prevents them from receiving any benefits until they come to school for a conference.

But personal problems may keep students from school. Mental-health clinician Beth Mellema meets with students at school, and sometimes with their parents at home, to get to the root of those problems.

Mellema says she sees a lot of student anxiety about coming to school. She also sees depression reflecting issues at home, such as divorce, deportation, incarceration or domestic violence.

“Think of the kid who’s just been removed from their parents and is in foster care for the first week,” Mellema said. “That kid’s not doing anything in class.”

But Mellema also sees parents forming close bonds with Sibley. A room set aside for them at the school hosts meetings, cooking classes and English-language lessons. Some moms celebrated Mother’s Day there; another hosted a baby shower. Parents also have put on potluck lunches for teachers.

The combination of parental involvement, student support and high expectations has paid off in the classroom, says Prisichenko, who was Sibley’s principal for seven years.

Once one of Grand Rapids’ lowest-performing schools, Sibley has shown marked improvement on the Michigan Department of Education “top to bottom list” measuring student achievement and improvement. The school ranked in the bottom 10th percentile in 2010-11 but progressed to the 22nd percentile in 2011-12, fifth highest among GRPS elementary schools excluding its Montessori schools.

Teamwork, collaboration and determination have made the difference, Prisichenko told the statewide visitors.

For more on the state Pathways to Potential program, click here