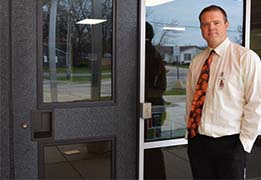 It’s a cold afternoon at Zinser Elementary School, the first big snow of the season. Parents have begun arriving to pick up their children but the front door is locked. Secretary Barb Koopmans keeps an eye on the clock, waiting until the 3:40 p.m. bell rings to let them in. For now, moms and dads have to huddle around the entrance or wait in their cars.

This is school security now. No more parents breezing in and out with a friendly wave to the principal’s office. At Zinser and other schools in Kenowa Hills, visitors are admitted only after they press a buzzer and an office staffer checks a security camera before opening the door. Even familiar parent volunteers must sign in and don visitor tags.

It may seem unfriendly and inconvenient to some. But parents like Greg Porter say it’s well worth the trouble.

“This is a precaution they’re taking that’s necessary in this day and age,” said Porter, after picking up daughters Sofia and Shelby on a recent day. He’ll wait in the cold, he said, “For the kids’ safety, any day.”

Buzzer systems are among security upgrades Kenowa and other Kent ISD districts have made since the Dec. 14, 2012 mass shooting at Sandy Hook Elementary School in Newtown, Conn. The horrific murder of 20 children and six faculty by Adam Lanza has added a new level of vigilance to one of schools’ most basic duties: keeping their students safe.

As the first anniversary of that dark day approaches, school leaders say such tragedies have fundamentally changed the requirements of a secure school. Shootings such as Sandy Hook, and the Columbine High School massacre of 1999, call for more severe and expensive measures.

Kent ISD schools, like those nationwide, have built more secure entryway vestibules, reviewed emergency procedures and increased lockdown drills, among other changes. While some local districts already have armed security officers, districts such as Kenowa are considering them as extra protection against potential assailants.

Some parents may be put off by measures such as having to be buzzed in to their child’s building, officials concede. But they insist it’s necessary in order to keep out less benign visitors.

“You don’t want an unwelcome school,” said Zinser principal Ross Willick.  “But after Sandy Hook, what’s more important, parents – the safety of your kids or convenience?” 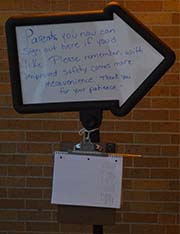 Kenowa Hills was able to install buzzers and security cameras in its schools thanks to a $13.8 million bond issue approved by voters in 2010. Some had been installed prior to Sandy Hook, but the system was completed after it was recommended in security surveys conducted early this year by Walker Police and the Kent County Sheriff’s Department.

The surveys also recommend heavier-duty glass for school entry ways, and vestibules that would force visitors into the front office before entering the school. The vestibules will require more money from the community in three to five years, said Superintendent Gerald Hopkins.

Such measures can only slow down someone intent on harming students, giving staff more time to lock down the building and notify police, Hopkins noted. But the need for more protection is “a sign of the times” that was reinforced by Sandy Hook, he added.

“It was a reminder that we’re all vulnerable,” Hopkins said. “It could happen to anybody, anywhere.”

The police surveys’ top recommendation for Kenowa schools is hiring an armed officer to oversee security for the district — or at least providing a greater police presence.

Hopkins said Kenowa is in preliminary discussions with the Kent County Sheriff’s Department about the possibility of hiring an officer, and is studying how much officer time the district would want.

Some Kent ISD districts employ such officers but it is not common practice. 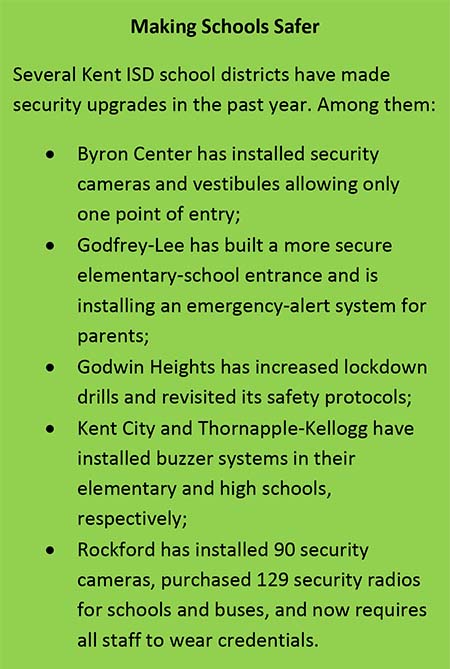 Northview Public Schools has a full-time resource officer whose costs are shared by the district and Plainfield Township. Besides being armed and able to reach any school within minutes, the sheriff’s department deputy is valuable in other ways, said assistant superintendent Craig McCarthy.

“He is a very positive role model for our students, and is also available to work through student issues and avoid possible confrontations,” McCarthy wrote in an e-mail.

Law enforcement officers have increased their visits to Kenowa schools since Sandy Hook, said  Gilbert Redzinski, a school resource officer for Walker Police.  They also arrive for lockdown drills, and talk to teachers about how to respond to armed intruders.

The security survey he conducted says that if hiring an officer is not affordable, schools should invite police more often to school activities such as class parties and sporting events. An officer’s sheer presence can deter a potential killer, Redzinski said.

Willick said he would like to see the district hire an armed officer, saying, “It’s hard to argue that having a security officer wouldn’t make us more safe.” But he cautioned, “If somebody’s determined to do something that bad, that might just be the first person you take out.”

Several other districts in Kent ISD have made security improvements this year. However, the cost thwarted at least one district’s efforts.

Wyoming Public Schools voters on Nov. 5 turned down a $37 million bond proposal that would have created more secure entry ways.  It was the second time this year voters turned down the millage, this time by just 79 votes.

Lowell Area Schools had more luck. Voters approved a 1-mill request that includes more than $1 million for security upgrades. First priority is buzzer systems for all elementary schools, with vestibules planned down the road.

The need for such improvements was brought home by an incident this fall at Murray Lake Elementary School. A young man carrying a baseball glove walked into school, past the front office where staffers were busy and into a cafeteria full of children at lunch.  He said he was there to pick up his son – which was untrue — and seemed “confused” and “agitated,” said Superintendent Greg Pratt.

Teachers led students back to their classes, the building was locked down and the sheriff’s department was called. A deputy led the man away without incident.

“We learned a lot from the situation,” Pratt said. “We feel like we’ll be better prepared for future instances if they occur.”

Jo Salgat, a parent who worked for the millage, said the incident underlined the district’s inadequate security systems.

“We have had some close calls,” said Salgat, the mother of two elementary students. “We need to learn from them and make our security measures much stronger.”

Welcoming but Safe: What’s the Balance?

A similar incident at Zinser Elementary in the spring of 2012 heightened safety concerns. A young man walked in, wandered through the halls and stood outside a classroom by a drinking foundation. When a teacher confronted him he claimed he had come for a drink, but he left when he was asked.

The incident “opened some eyes,” said Willick, who was not principal at the time. Last year he formed a parents’ safety committee that reviewed procedures and recommended changes, such as activating a partially installed buzzer system.

The Sandy Hook shootings ratcheted up the process. Hopkins requested the police security surveys, which recommended more than a dozen changes for all schools.

Several have been made at Zinser besides the buzz-in system. They include not allowing parents inside to pick up their children until the bell rings and increasing the visibility of police officers. Plans also call for a new classroom locking system.

Willick admits the access restrictions have been “tough to handle” for some parents. But he noted he doesn’t even allow his wife to enter early when she picks up their child from kindergarten.

Hopkins, the superintendent, said he struggles philosophically with putting up barriers.

“It looks like we’ve created these locked-down institutions. That’s not what schools are supposed to be.”

But he said providing a secure environment for students to learn trumps his reservations: “Our number one priority is student safety.”