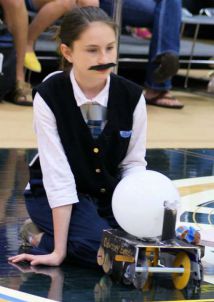 Question: What do you get when you mix a Model T, legendary inventors, an electric eel and a tricky obstacle course?

The Emmons Lake Elementary School team, coached by parent Caryn Kersey, completed an epic journey that began in October with their successful trip to World Finals May 22-25 at Michigan State University. The five team members worked together on an interesting challenge: figure out how to make three vehicles that can each sit inside a 12-by-18-inch box deliver parts to an assembly area. After delivery, the parts are assembled into an animal that then performs a trick.

They were competing in the “Pet Project” category for Odyssey of the Mind, an international educational program that provides creative problem-solving opportunities for students from kindergarten through college. Team members apply their creativity to solve problems that range from building mechanical devices to presenting their own interpretation of literary classics.

The elaborate skit involved a museum, characters Henry Ford, Orville Wright and Alberto Santos-Dumont, who came to life with the strike of lightning, and Thomas Edison’s pet electric eel.

Team member Lilly said preparation included a trip to the Grand Rapids Public Museum, and “teamwork, lots of teamwork.” She said performing was an amazing experience.

“It’s kind of great because everybody’s watching and are interested,” she said.  “I love performing.”

The team placed first at the state competition in Traverse City Feb. 13 and second at the regional match March 3 at Forest Hills Central High School.

They also won the coveted Renatra Fusca for creative thinking and risk-taking, which automatically advanced them to World Finals, though they also qualified with the second place finish. 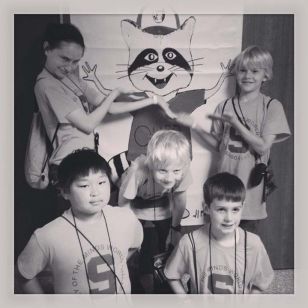 Caryn Kersey said the team has worked a minimum of two days a week on the project, which is done completely by students, from costume-making to set building.

“They come up with it all by themselves,” Kersey said. “The coach is only there to help guide them and remind them of the rules of Odyssey of the Mind.”

They aren’t rookies, she said. Three of the student have been teammates for four years and can easily handle power drills and saws required for set-making.

Students also had to be very budget-conscious, with a cost limit of $145 to spend on their project, Kersey said students used many recycled materials to stay under budget.

At World Finals, the team also hosted a buddy team from the International school of Geneva, which included students from Bulgaria, the United Kingdom and Australia. The teams spent time together throughout the weekend.

“It was neat to see them and how they interacted,” Kersey said