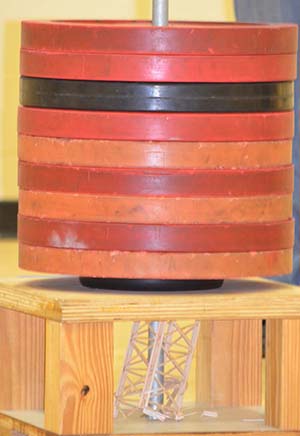 It doesn’t look nearly big enough to hold 400 pounds. After all, it’s just a little toothpick-scaffold-like structure made of balsa wood and glue. It weighs just 15 grams, or 0.03 pounds.

But the “little toothpick scaffold that could” actually held 425 pounds – and brought a moment of glory to Lowell Area School’s Odyssey of the Mind program.

The structure built by the Murray Lake Elementary Odyssey team took first place in the April 15 state finals in Traverse City. So did the Lowell Middle School team, using a different structure to solve the same problem.

Both teams now head to the May 22-25 international finals at Michigan State University, where they will compete against more than 800 teams from the United States and beyond. That is a rare accomplishment for any school, but even more so for a program only seven years old.

“The kids are very excited,” said Lori Lothian, a parent and coordinator of the Lowell Odyssey program. “It’s the first time Lowell’s had any teams make it this far, and a lot of these kids have been doing Odyssey for quite awhile.”

School officials are proud of the students and the parents who coach them, said Nate Fowler, middle school assistant principal.

“It’s nice to see all the hard work they’ve put into it pay off,” Fowler said.

Lowell did not have an Odyssey program until Lothian and her husband, Ryan, moved to Lowell from Greenville seven years ago. Ryan  had grown up competing in Odyssey, and both he and Lori were coaches in Greenville. They suggested starting a program at Murray    Lake Elementary to the principal, who readily took them up on it.

“The value of letting the kids have an outlet for their creativity was something we thought was needed in our district,” she said.

Her daughter Emily, now 12, started the program as a kindergartener that first year on one of three teams at Murray Lake. The next year the district’s three other elementary schools fielded teams, and the middle school eventually joined in. Eight teams now comprise about 50 students, with the high school expected to add the program in a year or two.

This year’s teams worked for months to prepare for March’s regional tournament in Greenville. They designed and built their structures, and made props and wrote script for skits they performed. They also had to build a ramp on which to roll their structure before piling weights on it.

At the tournaments, they had eight minutes for their presentation. First they performed “commercials” for their structures, the Murray Lake kids simulating a newscast. Then they began loading them with weights onto a “crusher board,” adding more until the structure collapsed.

“By combining their skills and creativity, students learn a lot as they compete,” Lori Lothian says.

“A lot of times in school kids are taught there’s a certain way to do things,” she said. “In Odyssey, there’s no correct answer. The sky is the limit.”

Finding a way to help Ukrainian kids, through books

A sound investment in reading comprehension