When St. Nick isn’t packing toys or feeding reindeer, he likes to swim. Because of the icy Arctic waters near the North Pole, he jumps in wearing his full red suit, complete with furry trim and hat.

Sutherlin invites Santa each year for a swim at the Kentwood Aquatics Center at East Kentwood High School. Santa magically arrives for a two-hour session during which children can sit on his lap on the lifeguard chair set in the pool.

After the wishes are all made, Santa jumps in the pool, his fluffy beard and thick red and white coat billowing around him, to the delight of the children. Santa often sings Christmas carols as he swims.

“They absolutely love it,” Sutherlin said.

Santa has come for the past three years to swim with children for the “Swimming with Santa” event. Lifeguards dress like elves for the day, and more than 100 children bring in gifts for Toys for Tots in lieu of admission.

The U.S. Marine Corps Reserve Toys for Tots Program collects new, unwrapped toys to distribute as Christmas gifts to children in the community.

Suthelrin said he first thought of inviting Santa to swim while he was aquatics director for Grand Rapids Community College, where he worked for 15 years. When he started at Kentwood in 2011, he decided the Kentwood pool was the perfect venue.

“Anytime you can see a kid smile, that is what it’s all about,” Sutherlin said. Also, Sutherlin loves to share his huge passion for swimming with people by “getting them in the pool.”

The event is made possible by volunteers who contribute their time preparing and working at the event. “It was the whole community’s support for an idea I was lucky enough to come up with,” he said.

Sutherlin has been a longtime supporter of Toys for Tots, and is happy to host anevent where more than 100 gifts are donated. He said Santa sometimes realizes the difficulties children face when they sit on his lap and tell him their wishes. 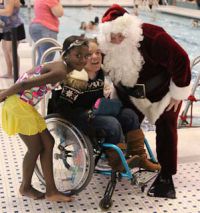 “If we are able to give one child or family a little bit of the Christmas spirit it’s worth all the man hours and sacrifice,” he said.

He also hosts an in-the-water Easter Egg hunt each spring.

So how does it feel to swim in a Santa suit?