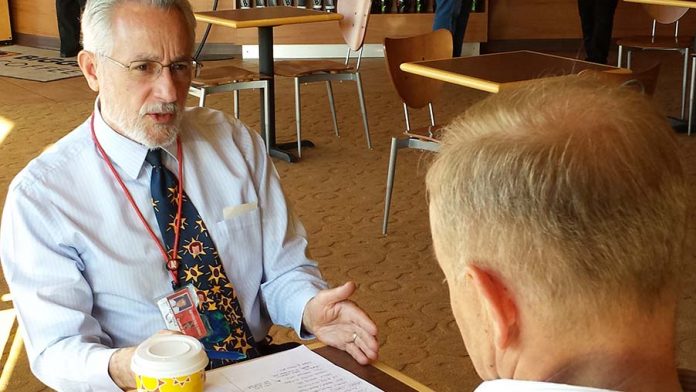 A buzz of excitement spreads through the classroom like an electric current as 24 fourth-graders await Mike Paskewicz’s permission to open their bright red packages.

Inside the packages are a book of stories and illustrations created by the East Oakview Elementary class, published in handsome bindings. It’s an annual project Paskewicz brought to Northview when he became superintendent four years ago.

“You will be the very first person to touch your book,” Paskewicz tells them. Moments later, he says, “Well, go ahead.” Whoops, squeals and shredding sounds ensue.

“Here’s my page! I found my page!” a girl with purple hair shouts.

Paskewicz grins and nods his head. In the grind of a 14-hour day running a suburban school district, this moment with excited students is sheer delight.

“All kids need a champion,” Paskewicz says later. “This is oneway to provide a champion for them.”

For Northview’s 3,450 students, Paskewicz is champion in chief. His days are spent advancing their cause: 5:30 a.m. emails to legislators, conversations with parents and principals, class visits, Rotary lunches and evening concerts.

Even the fourth-grade book project has larger aims. He tells students to send copies to lawmakers including President Obama. They gasp.

“So Obama is going to read my thing?” one student asks, amazed.

“This is another piece of evidence that public schools work,” Paskewicz says later. “They need to see it.”

Putting evidence of successful schools in front of those who fund them is an ongoing mission for Paskewicz. Three mornings a week he emails state legislators and Gov. Rick Snyder, offering “everyday evidence” of student success and inadequate funding.

The day before his visit to Oakview, his email pointed out 90 percent of Northview’s graduating seniors had been accepted to college – a blunt rebuttal to Snyder’s assertion only 17 percent of graduates are “college ready” as measured by ACT scores.

“This is quantitative proof, not a measure on a test, that Northview graduates are college and career ready,” Paskewicz argued in his email.

Lobbying lawmakers is part of a typical Paskewicz day. Budget and achievement data number-crunching, staff meetings and student brush fires are par for the course. So is checking on construction of a major addition to the high school. 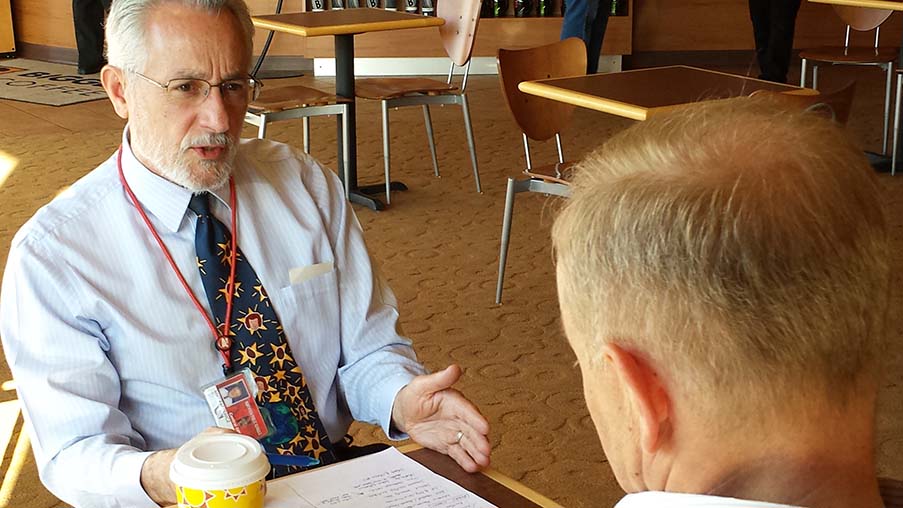 But spending time with students brings him the most joy.

Every Thursday, Paskewicz meets with Connor Wood, an eighth-grader at Crossroads Middle School he’s been mentoring for four years. On a recent day, Connor talks enthusiastically about fishing with his grandfather and his interest in military service.

“We took a test, and I think I did B-ish,” Connor replies.

Mentoring Connor keeps him connected, Paskewicz says: “That’s what I got in the business for, not to send emails to legislators.”

A teacher at heart

Becoming a superintendent was not in his sights when Paskewicz entered education nearly 40 years ago. The Comstock Park High School grad started out a teacher after earning bachelor’s and master’s degrees from Grand Valley State University. He later earned a doctorate from Western Michigan University.

“All I wanted to do was teach fifth-graders how to read,” says Paskewicz, 63, who taught in Grand Rapids Public Schools. He then served as principal of Fountain Elementary School and assistant to the superintendent. He was a superintendent in Utah, Illinois and Colorado before coming to Northview in 2009.

For all its 3 a.m. worries and daily challenges, Paskewicz clearly loves his work.

“If you really like solving conflict and helping people develop, it’s a great job,” he says.

His office computer is loaded with elaborate graphics detailing the district’s budget challenges and priorities. The nearby Board of Education room is papered with charts measuring student achievement. His email inbox is constantly full.

His brow furrows when he talks of the budget cuts he’s had to make. But he beams when he greets students and staff in the crowded hallways.

“You get so much work done that way,” he says of circulating the buildings. “And you get a chance, of course, to see kids.”

That engaging personal touch and his caring nature have made Paskewicz a popular superintendent, says Mike Anderson, president of the Northview Education Association since 1980.

“I’d say he’s probably one of the most fair-minded, genuinely nice people I’ve ever worked with,” said Anderson, who recently led union negotiations for a three-year contract.  “Our district is very fortunate to have him here. He’s an advocate for Northview, for the community and for kids.”

Advocating for students is a daily task. At a recent honors luncheon for students, he read an email on his smart phone from a governor’s aide, in response to Paskewicz’s plea for more funding.

“‘Thank you for joining our team,’ ” Paskewicz quoted the email. He added drily, “I’m not on the governor’s team, and won’t be until he properly funds public education.”

That day began with a 7:30 a.m. meeting with school board President Timothy Detwiler, ended with a 7:30 p.m. pops concert, with a class visit, upset parent phone call and a principal’s assessment in between.  Keeping up with him is an endurance test.

He’s wearing a tie covered with children’s faces when he meets Detwiler at Biggby Coffee. They cover several issues, including an outreach to churches and businesses, the teachers’ contract, schools of choice applications and community feedback. Detwiler tells of an older couple who said they were willing to sacrifice financially for the students.

“That’s the talk around my neighborhood, and that’s good talk,” he says.

Paskewicz also tells Detwiler of a student behavior problem – which lands on his desk when he gets to the office. The student’s angry mother is on the phone.

Paskewicz patiently listens to her complaint about how a principal treated her daughter. After several minutes, he says, “How about if we consider this?” He lays out a plan and promises to call her back in two days. A plan is subsequently worked out to evaluate the student for appropriate placement next fall.

His mood lightens after the phone call, as he watches Northview High students help a group of Kent County special-needs students practice for their prom. He smiles broadly as they do the two-step and chicken dance in the cafeteria.

“This is not measured on a standardized test,” he says. “I like being around it.”

After observing student presentations in an English class, he speaks at a luncheon honoring students for showing dignity and respect. He tells a story about when he and his wife, Ruth, lived in a rough neighborhood where youths were breaking into garages and breaking toys. A woman read stories to the youths and gave them flowers and vegetables from her garden. They stopped causing trouble.

“That woman changed the neighborhood, changed me,” Paskewicz tells the attentive students and their parents. “My challenge to you: Carry this to the next step. Who are you going to change? Maybe it will be a superintendent of schools.”

As the crowd applauds, one senses that already has happened.

Although the new state budget increased aid to $7,076 per student, that increase will be undercut by lower state payments to the school employee pension fund, Paskewicz wrote. Dillon voted against the budget bill as inadequate for the needs of schools.

“While there are minimal increases in the budget, they do nothing to make up for the money that was stolen from our schools over the last two years,” Dillon said on his Web site.

Despite these sobering trends, Paskewicz proudly points out gains in student achievement scores. Northview was the first Michigan district accredited under new standards from AdvancED, an international agency.

Success despite cuts is the story he constantly tells critics of public schools.

“You’re not going to tell me every day it’s bad, because it’s not,” he says bluntly.