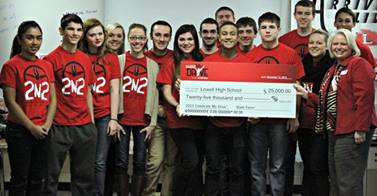 Jacob North knows of too many people his age killed in car crashes.

“The ones that really hit home are the ones where we have students killed,” said the Lowell High School senior. “Those are things you never forget.”

North and some of his classmates are determined to reduce future tragedies by promoting safe driving in their school. Their Youth Advisory Council recently was given $25,000 by State Farm Insurance as a reward for a driver-safety campaign held this fall.

Lowell was one of 50 larger high schools in America – including just three in Michigan – to win the grant in State Farm’s “Celebrate My Drive” competition. Some 4,000 schools competed nationally for the prize, announced Dec. 9. Two other schools, in Tennessee and Louisiana, won a grand prize of $100,000 and a concert by Kelly Clarkson.

Part of Lowell’s $25,000 grant will go to additional school safe-driving efforts, with the remainder split among arts, athletic and technology programs.

Winners were chosen by students, teachers and others casting votes online. The voting took place the week of Oct. 18-26, when Lowell students conducted safe-driving activities in school.

“Lowell is a very united community and very committed to every good cause they can find,” he said.

Teaming Up for Safety

The initiative evolved from Lowell’s partnership with the Youth Advisory Council of the Ionia ISD. That group invited Lowell students to start their own driver-safety program two years ago, said Chaye Klomparens, adviser to the Lowell council. The Ionia and Lowell councils continue to meet monthly.

Lowell’s students have been highly motivated, Klomparens said, and last year presented their program to the National Youth Leadership Conference in Denver, Colo.

To prepare for this fall’s Celebrate My Drive campaign, about 14 students from the Youth Advisory Council and Student Leadership class promoted the campaign at summer events such as the Riverwalk Festival. They continued this fall at football games, the Fallsburg Fall Festival and other events while getting the word out in schools and on Facebook.

For the week of voting, the Lowell and Ionia Youth Advisory Councils organized a statewide safe driving conference in Holland. Lowell students also held an assembly, heard a presentation from a state police trooper, and set up driving simulators on which students could experience what it’s like to drive while impaired.

Lowell students are keenly aware of safe-driving issues, Klomparens said. The area’s country roads and heavy deer population are a concern, she said, as are driving while texting or intoxicated.

Accidents in recent years have claimed the lives of Lowell graduates including Andrea Herrera, 20, who was killed Oct. 10 when police said another vehicle slammed into one driven by her boyfriend. The other driver was charged with two counts of drunken driving causing death.

“In our school the issue of safe driving is really important,” Jacob North said. “We wanted to really make our school an example of safe teen driving. Hopefully if other schools can see what we’re doing, we can have an impact there, too.”