Chinese Students in Kentwood and Rockford: So Far, So Good 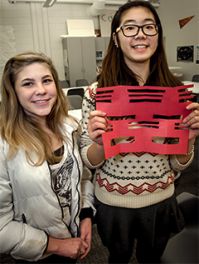 Editor’s note: Ten Chinese students are studying at East Kentwood and Rockford high schools this year, under a partnership with Weiming Education Group. After introducing them last fall, School News Network returned to see how they are doing midway through the school year. Meanwhile, more Chinese students visited the schools during the recent Weiming Winter Camp. Details of their visit can be read in the story “… And More on the Way?“

He lives with the principal.

Principal John Keenoy, his wife, Missy, and their children, John, a junior, and Mackenzie, a sophomore, are serving as host family for Harry, one of five students from the Weiming Education Group enrolled at East Kentwood this school year.

Harry and fellow Chinese students Krystal Liu, Bill Liu, Victoria Xu and Jean Wu plan to return for their senior year after spending the summer back in China.

Harry, known around school for his happy personality, has grown to love American foods like bacon cheeseburgers, bagels and pizza, and joined the swim team.

A talented artist, he spends many evenings sketching faces and cooking. When he started swimming, his new network of friends grew by many.

On a recent morning, Keenoy talked about how he planned to watch Harry compete in freestyle and breaststroke at the evening’s swim meet. Harry has become part of the family, he said, adding, “We support each other like other families.”

Wearing his Falcons swim team jacket, Harry grinned at Keenoy as he talked about his time in the United States.

“They are very nice people,” Harry said of the Keenoy family.

Keenoy said Harry has really made an effort to make the most of his time at school. He has committed himself to the 5 a.m. practices though he was never on a swim team in China.

“I think swimming is a fun sport,” Harry said.

Missy Keenoy said they are impressed with his artistic talent and the way he handles new experiences.

As Rockford High School calculus teacher Fred Reusch drew complex problems on the white board, Danny Chan watched closely and tried his own calculation. He raised his hand.

“The answer is different, I don’t know why,” he told Reusch. The teacher explained the error and told the class, “It’s good thinking Danny went through, but it actually made the problem harder.”

After class, Danny said he likes calculus despite his misstep.

He takes the class with fellow Weiming students Irving Zheng and Chris Chen, all seniors. They also compete in a church basketball league as part of their American acculturation. 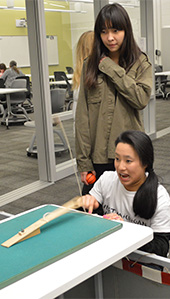 For them and two other students, juniors Zany Zou and Misy Shi, learning to take notes and speak in English has been one of the greatest challenges – although Irving insisted, “I like to chatter with my classmates.” Danny and Chris have taken speech class to help them learn.

Zany said art has been her most valuable class so far, adding, “I like painting a lot. We don’t have arts class in China.”

The senior boys plan to return to the U.S. for college next year. Chris has applied to three, Irving to two. Danny and Chris have taken their SATs while Irving will take the ACT.

Would they recommend other Weiming students come to Rockford? Danny and Irving, at least, are unequivocal.

“I will fight for them, because Rockford has a lot of opportunities,” Danny said. Added Irving: “Rockford is great.  I would tell them, ‘Don’t worry too much.’ “

Rockford student Ben Sims said the Chinese students have been a pleasure to be with.

“It’s been really cool to find out about their culture,” Sims said. “They’re just normal kids that like to have fun as well.”

While they may be half a world away from home, students still rang in the Chinese New Year with traditional festivities. They recently joined teachers, host families and younger Weiming students, who were here on an 11-day visit, for a carnival-style celebration of food, games and crafts at Kent Innovation High School. 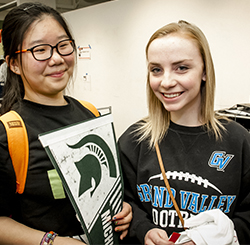 As Bill Liu snapped photos of students, he said he is enjoying his time at East Kentwood and plans to join the track team in the spring.

“People are nice and very, very helpful,” he said.

“I like this school because they give me the chance and enough time to learn what I need to learn,” she said.

…And More on the Way?