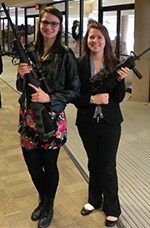 300 criminal justice students from Kent Career Tech Center (KCTC) and 13 other West Michigan tech centers crowded around representatives from military units, the Secret Service, State and Local Police departments, as well as court representatives who shared their experiences in the field. “I’m overwhelmed by the response of local agencies for the event,” said Kent ISD superintendent Kevin Konarska.

Jonathan Shereda, a Grandville Public Schools students enrolled in KCTC’s Criminal Justice program explained the event enabled him to research what career path he wants to go into. Shereda said “I’d like to be a Police Officer as soon as possible, which involves various requirements like cadet programs and internships.”

Students got to hear firsthand what the job is like through discussions with State and Federal Officials. They learned being in the force is not scripted. “You must know how your actions will affect others. Once you’re in the driver’s seat, you’re a big boy now,” said Shereda about the seriousness of the job.

Tyler Day is homeschooled and takes classes in the Criminal Justice program at KCTC. “I was surprised the Army members were more chill, and Police Officers more serious,” he said. Day understood that once you are put in the line of duty, personality must take the back seat to responsibility.

Brad Mercer, police officer from the Kent County Sheriff’s Department, said he enjoys being able to share the responsibilities of the job and how to handle special equipment with students. “Usually people hear about us beating doors down,” said Mercer, explaining there is a lot more to being a police man than the bust.

Some students are ready to jump into their careers immediately after the school year is over. Chandler Borg, Rockford Public Schools student from KCTC is taking a job placement test for the National Guard right after the convention. Antonio Bailey, from Kelloggsville was able to set up an interview with the Army by talking to representatives at the conference.

One common theme among the students was the desire to do something positive for the community. Ottawa Hill’s student Breasia Moore hopes to become a Juvenile Probation Surveillance Officer. “I see a lot of stuff at school like bad behavior between students and teachers. I want to be there to help in those situations,” she shared.

Many of the students, have a bright future ahead explained Irene Roberts from the Domestic Assault Response Team at 61st District Court.  “CTC programs produce good students. They know what they are interested in and are focused. They have good communication skills, and are polite and mature.”

The conference also included a series of speakers, including Colonel Betty Yarbrough, leader of the Defense Committee for Women in Services, from the Pentagon.

Colonel Yarbrough’s message was clear. You can’t base a person’s talent on how they look or what they believe. She explained that the jobs students are considering require a lot of teamwork.

“The way to get the best outcome is to have the best team, regardless of their individual backgrounds.” She explained that excluding someone from your team based on how they appear could be the difference between success and failure, life or death.

“The best way to get an answer for an objective is to look at it from all angles,” said Yarbrough. “Having people on your team from different viewpoints, backgrounds, or ethnicities can help with objectives by providing more ways of looking at things.”

KCTC criminal justice instructors Kelly Bowers, Gregg Isenhoff, and Tom Lamica organized the event to provide students a fresh outlook and the ability to make new connections. Some left having secured interviews for jobs, training or internships. Others left with a new perspective derived from the speakers or conversations they had.

One particularly lucky student left with a direct phone number for one speaker, Special Agent Sonja Everitt who assured him “If you need a connection made, just call.”