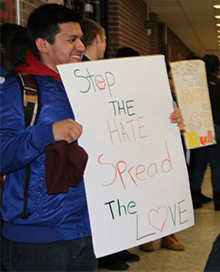 Union High School senior Angel Barreto-Cruz isn’t afraid to speak up for a cause.

Chosen to represent a leadership group including 11 of his peers, he laughed and said it’s because he likes to talk.

But during a recent demonstration to spread an anti-bullying message with other members of The GR Initiative for Leaders Ambassador Club at Union High School, he silently held up a sign that read, “Stop the Hate, Spread the Love.” Other club members held signs in the lunchroom and hallways.

The Ambassador Club is a program started at Union and Ottawa Hills high schools last year by GR Initiative for Leaders (GRIL), a faith-based organization created by alumni of the DeVos Urban Leadership Initiative, a training program for urban youth workers. About 30 teens at each school gather twice weekly during lunch with sessions led by GRIL staff members. Discussions and activities are based on six core values of the GRIL program: balance, accountability, interdependence, empowerment, leverage and diversity.

While some club members expressed shyness about participating in the demonstration, Angel said he was happy to stand up against a problem that affects high school students everywhere.

“I like helping people,” he said, explaining that the club helps him develop skills for improving the school and his future. “This is giving me the skills so when I get a career I can use them.”

During a recent lunch period, club members discussed the positive and negative responses to their anti-bullying demonstration, and talked about a plan to wear duct tape at a later date as a way to spark further discussion about bullying.

Angel said he sees the leadership opportunity as a way to get to know students at Union High, with its diverse population. “It’s a good way to learn about other people,” he said.

Realizing They Have a Voice

The demonstration resulted from students identifying bullying as an issue they wanted to address. It’s just one way for them to learn they can make a difference in their school and community, said Kelvin Jackson, community liaison for GRIL.

“Because you brought awareness to it, you had a voice,” Jackson told students. “You had power in numbers.”

Senior George Miguel said the club is helping him develop leadership qualities that can improve his life. “It’s just bettering yourself, you know?” he said. “Becoming a better person in your own way.”

Jackson said students learn what they do at school affects their home and community as well. “They become more confident in knowing who they are and it gets them thinking about where they are going to go.”