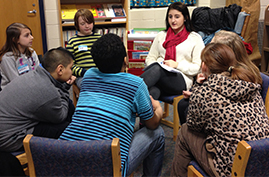 For Anaya Liptrot’s final project in the Teen Leadership class at East Kentwood’s Freshman Center, she described job shadowing at a nursing home, but mentioned something bigger.

She told classmates how her life had changed.

“I want to thank everybody in this class,” Anaya said. “I feel like everybody has impacted my life. I’ve met lots of new people and I got out my shyness. Special thanks to Mr. Pellerito for showing us how to be a real leader and for making this class fun and not just a boring elective.”

That was the sentiment echoed by students throughout the last session of the trimester-long class. They felt bolder, more confident and less afraid to be themselves. They could speak publicly much better than before. They could communicate with adults in a positive manner.

Their teacher, Joe Pellerito is arming them with confidence and social skills invaluable in moving through teenage years, a time fraught with anxiety and insecurity for so many students.

“Just as students will soon get their license to drive, I believe students are taking the steering wheel in their personal lives as well,” he said. “This class helps them define who they are and what they stand for.”

Students in Pellerito’s class learn things like the meaning of body language, the importance of eye contact, how to talk to an adult and what a difference they can make in the community.

Pellerito teaches through demonstration. To show students the value of making a good first impression, he demonstrates how to make a really bad one.

“I show up a minute late, talking on my phone and dressed too casually with a hole in my jeans or a slightly stained shirt. I then get on my Facebook account and start checking my fantasy football points. When students come up to ask what they should do, I point at the board without eye contact and abruptly say, ‘What we always do.'”

After five minutes, he asks, “Hey, how long does it take to make a first impression?”

The students apply this to other situations: a job interview, meeting a significant other’s parents for the first time, or the first day at school. Students also participate in several mock interviews and complete at least two hours of job shadowing or community service.

Most ninth grade students take the course, which is based on a curriculum created by Capturing Kids’ Hearts, an educator training program designed by The Flippen Group. Other ninth-grade leadership teachers are Katie Coole-McCurdy and Kelly Keimig. 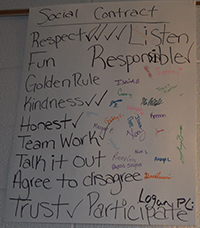 At the beginning of a recent Friday session, students shared good news — small details of their lives like hanging out with friends or scoring in a basketball game — before giving presentations on their final project, which involved job shadowing or community service.

In class they also talked about their values, such as family, friends and education.

Students said they’ve come to realize how much they have in common with people outside their typical group of friends. The culture set from day one in the class allows that to happen, Pellerito said.

“It’s a process of creating a safe environment of empowerment where students do a lot of the leading,” he said.

The class creates a “social contract,” allowing students to define how they think an effective team operates and creating a safe environment of risk-taking and learning.

“By making it their classroom, they are taking the lead in how our class operates and will step up when we are not living by the contract,” he said.

Freshman Xoey Suykerbuyk offered feedback to a classmate who shared how she feels more confident, despite negative feelings about her physical appearance.

“I think it’s cool we’ve helped you become more confident, and I feel like you should be,” Xoey said. She also said she’s learned to think more about her actions.

“Sometimes if I say something rude I think about what I just said and I try to change it,” she said. “Before, I would have been like, ‘Whatever.’ I feel this class really has changed a lot of people. It makes people a lot more comfortable about themselves and being around others.”