Students Jump to Top in the State for Heart Disease Fundraiser 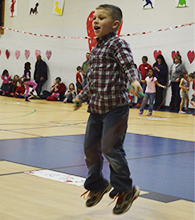 Inside the Lee Elementary gym the music blares and second- and third-graders work up a sweat jumping rope. Parents line the walls watching, cell phones in hand taking pictures. When the day is done more than $27,000 will have been collected for “Jump Rope for Heart” by the students. Based on past events, it very likely will be the top amount collected for the American Heart Association fundraiser of any school in Michigan.

As fun as it looks, the serious side of the event strikes a few days later for organizer JoAnne Desy when her brother had a heart attack. It isn’t the first time Desy, Lee’s physical education teacher, has been on that side of the disease. Her father had two open-heart surgeries before dying, and her mother-in-law died from heart disease.

“Heart disease is the number one killer in the United States, and it is very important for students to learn how to prevent this from happening to them,” Desy says. “Physical activity and healthy eating habits are key.”

The huge amount the students raise is no surprise to organizers, but they say it is amazing for just two grades to raise that much. The Thornapple Kellogg school consistently brings in the largest amount in the state, giving more than $310,000 to the American Heart Association over the past 18 years.

“JoAnne is the heart behind it,” says Lee Principal Angela Jefferson. “This is an important cause for her.”

It also has become pretty important for the students, Jefferson adds: “Kids know when they come to Lee, they get to do Jump Rope for Heart.”

Desy, who’s been leading the fundraiser since it started, sees it as her job as a physical education instructor to teach students about heart health. “It’s important for kids to know to take care of themselves at an early age, and what better way than to jump rope,” she says.

Kirsten Bonnema is a veteran of the event, having watched three children jump their way through the day over the years. This year, Ethan, her second-grade son, is sweaty and red-cheeked as he jumps in front of her, showing off the skills he practiced over Christmas vacation.

“I think it’s crazy the support they have,” Bonnema says. “I’m blown away every year by how much they raise and how much fun they have.”

As the song “Call Me Maybe” by Carly Rae Jepsen rocks the gym, Krisca Gould, youth director for the American Heart Association, talks about the many people the disease affects. “Everyone knows someone who suffers from diabetes, high blood pressure, high cholesterol and heart diseases that cause heart attacks,” she says.

Desy adds another reason she thinks the fundraiser at Lee is so successful. “It’s Middleville,” she says. “It’s this community. They’re very supportive.”

The school’s 450-plus students start jumping at 9:30 a.m. and keep going until about 3:30 p.m. Sixteen classrooms do an hour of jumping, four classes at a time, to dances like The Cupid and Chi-Town Shuffle. The students rotate jumping every two minutes.

The fundraiser includes students creating a wall of hearts. On each heart is the name of someone they know affected by the disease.

At the end, students join together on the gym floor for the Chi-Town Slide, with Desy in the middle leading the steps. Despite telling herself year after year she’s not going to cry, she always does.

“Don’t worry kids,” she says to the students over the microphone after wiping away the tears. “It is a joyful cry. It is a cry of joy.”