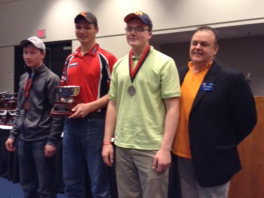 Come lunch hour at Kelloggsville High School, Alex Richards heads to a storage building behind the school to pull back arrows and let them fly.

The opportunity to shoot at targets in the school’s Archery Club has propelled the sophomore from novice archer to second-place finisher in a national archery competition.

The sharpshooter, who joined the club as a freshman, finished second at the National Field Archery Association national tournament March 15 in Louisville, Ky., just two points shy of becoming the national champion in the young adult class. He was one of 1,400 competitors from across the country in various classes.

“I was a little surprised,” Alex said of his impressive final score of 598 out of 600 possible points. “It was fun.”

Alex was a natural shooter from the start, said John Linker, a Kelloggsville High School science teacher who started the Archery Club three years ago with former Principal Rick Frens.

Alex, who also plays baseball for the high school team, said his interest in archery continued to develop after he joined the club. “I like doing stuff I’m good at,” he said with a smile.

He branched out to train at other venues, eventually practicing with three of his own bows including the Bear Strike bow he used at the national competition. He also trains at Al and Bob’s Sports in Wyoming and at the Chippewa Archery Club in Grand Rapids. He has finished in the top three, often first in his age group, at many tournaments across the state.

Alex said he looks forward to the club sessions at Kelloggsville. “It makes school a little more interesting,” said Alex, who hopes to get an archery scholarship from Michigan State University.

Linker, a longtime bow hunter, said he wanted to start the club as a cool extracurricular program.

He received a startup grant from the Department of Natural Resources’ National Archery in Schools Program to fund equipment, and a $700 grant for upgrades this year from the City of Wyoming Parks and Recreation Department.

The program has grown from six to eight boys and girls to 20, Linker said. The club practices three times a week during lunch hour.

“You don’t have to be the most athletic person in the world to be a good archer,” said Linker, who noted he could see Alex was talented right from the start. “Alex is a good kid. It didn’t take long for him to get the hang of it.  You could see the spark. He just took off.”

Alex’s parents, Aaron and Kris, travel with him to most competitions. His father helped raise funds to pay for the trip to the national competition.