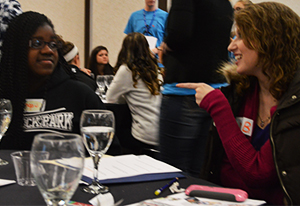 For an anti-drug campaign to have an impact at her school, Rockford Freshman Center student Ally Faulkner told classmates that it must be interactive and exciting.

“You’re not going to get through to them if it’s just videos,” she told fellow members of the Freshman Center Student Council who attended the recent Empowering Youth Leadership Conference at Calvin College. “We can’t have adults doing it; students will be like, ‘Oh, yeah, right.'”

Ally had the right idea. Students are most influenced by other students, said Kent ISD consultants Steven Dieleman and Cheryl Blair, and that was the reason behind the student-led conference.

“Research shows that when peers are taking the charge, young people are more likely to follow suit,” Blair said. “It’s their peers that say, ‘No, let’s do something else.'”

Ally and her peers were creating an action plan to inform students of the dangers of electronic cigarettes and marijuana, including a public service announcement and an anonymous survey to get statistics on how many students have experimented with drugs.

Ally said she thinks students will be surprised at how many students don’t use drugs. “I really hope we can show them not a lot of people do the things they say they are doing, and that the risks are greater than they think they are. It can ruin their lives.”

About 180 students from 16 schools created their own action plans to address substance abuse at their own schools during the conference planned by the area-wide Teen Leadership Team.

The team, started by the Kent ISD’s adult coalition – Healthy, Safe, Drug-free Schools and Communities, works to motivate students countywide to make a difference at their schools. The daylong conference included speakers on anti-bullying and drug use and training to teach students how to be effective leaders.

“The breakout sessions were most unique,” Dieleman explained. “Over 200 participants circulated in small groups to sessions facilitated by educators and community leaders.  They engaged the student participants in dialogue about important drug prevention issues.  The Teen Leadership Team designed this dynamic format.”

“We want to be able to make it more easy to identify problems in their communities and school environments and find better ways to tackle said problems,” said team member Jeremy Showell, a student at the Kelloggsville Rocket Learning lab.

“It’s also kind of a way to show everyone it’s not just them dealing with these issues. It’s a way to unite the schools and the Kent County area,” said Megan Hoffman, a Lowell High School junior.

Dieleman said he heard a great deal of praise for the team’s efforts. “Educators who participated told me this program was better than some national leadership conferences they’d attended.”

Healthy, Safe, Drug-free Schools and Communities is a collaborative that brings together school, governmental and community-based organizations to support youth development and work to reduce underage alcohol and other drug use, said Dieleman. It is funded through a five-year Drug-Free Communities Grant from the U.S. Department of Health and Human Services.

“We are all working together to make a difference in what kids know about drugs, believe about drugs and in the positive actions that they take,” Blair said.