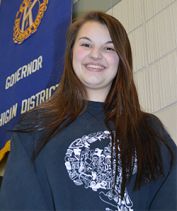 Addie Clipfell is the new governor for Key Clubs in the state of Michigan — the first time a Caledonia High School student has been elected to the office.

Not bad for a student who was timid and didn’t talk much when she joined the club last year as a freshman, according to club adviser Shant’l Raines. Addie even remembers telling her mom she didn’t know why she was getting into such an activity because it was so unlike her.

But after attending a district convention her attitude changed. It was a blast and she was hooked on its helping ways.

Addie was serving as lieutenant governor for the Michigan Division 4 Key Club when she went to the state meeting in March, and it was suggested she run for governor. Once again she started out hesitant, since she was only a sophomore. But then she asked herself, “Why not?”

Amy Kuppler, the previous club advisor and Caledonia special education teacher, was thrilled when Addie became the group’s state leader.  “Her energy and sparkle will be a great addition and asset,” Kuppler said. “I truly admire her.”

Members Want to Change the World

Key Club is a service-learning organization sponsored by Kiwanis International. It works on projects to aid the community and the world, and is the oldest and largest service program for high school students. Key Club supports several organizations and causes, including working with Kiwanis on Project Eliminate, which aims to eliminate maternal and neonatal tetanus worldwide by 2015.

“We’re perceived as people who want to change the world,” said Addie, the daughter of Tina and Thomas Clipfell.

About six of the Caledonia Key Club’s 16 members sat in a half-circle of desks at a recent meeting after school, presided over by club President Emma Gilliam. It ran in a professional, to-the-point manner with little chit-chat. Students’ topics included a community garden, creating a pamphlet and upcoming district and state events.

“It’s a great organization for students to learn about a bunch of different things and world issues,” Emma said. “I love it and the satisfaction it brings. All that hard work is worth it. You want to put your time into it.”

Already this year, the club has held a “miracle minute” at the homecoming football game, with members running up and down the bleachers collecting donations for Project Eliminate; operated bingo games at Station Creek Retirement Home; sent care packages to soldiers and bagged food for families. The next world project they’ll tackle will be Sew a Future, which buys sewing machines for mothers in India so they can make money for their families.

“It is a club that gives back through hearts of service and fundraising opportunities,” Kuppler said. “It is great because any student can become a member.  I love how diverse the members are.”

Despite its many activities, the club isn’t very well understood at Caledonia High School. A lot of students don’t even know what it does. Addie’s had more than one person ask “Do you make keys?” She even admitted when she heard about the junior version of the club, The Builders, she didn’t think it would be for her because she wasn’t “very good at building things.”

When they called her name as governor at the convention, she said it didn’t feel real.  “It was mind blowing,” Addie said, adding she thought, “Oh my gosh, I’ve got to go call my mom.”

Addie is a 4.0 student, a member of the orchestra, the Caledonia String Players, and the SHOCK and Lean on Me clubs. Key Club comes first, though. She stayed home over spring break while her family went to Florida so she could do Key Club activities.

But she’s still a teenager who can’t drive yet and has typical high school worries. That showed the last day before spring break when a large blue and gold banner was put up near the high school entrance bearing her name and new title, and a plaque beside it that featured her school picture from this year.

“Why do they have my school picture of me!” she groaned. “That’s the worst ever!”