High Schools Partner with GRCC to Get College Credits Early 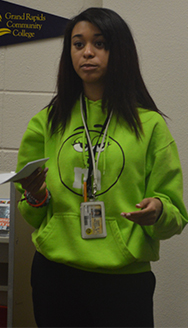 Godwin Heights and Godfrey-Lee high schools have joined the trend of offering high school students a way to earn college credit right at their own schools, in a new partnership with Grand Rapids Community College.

The Early College program will let Godwin Heights seniors with at least a 2.5 GPA earn up to eight college credits before graduating. A two-credit college study skills class and two, three-credit English composition classes will be offered at the high school.

Students learned they were selected April 14. The school narrowed down the group to 25 students based on ACT test scores. The school hopes to add 25 more juniors next January and sophomores later.

“It is my hope that Godwin Heights students in the future will have the ability to earn up to two years of college credit upon graduation,” said Godwin Heights Principal Chad Tolson.

Godfrey-Lee is planning to offer a college English course to 20-25 students in the fall and is investigating adding science and math later in the year or the following year.

“We wanted to help our students get a solid footing in their college readiness and experiencing college credit-bearing courses while still in high school,” said David Britten, superintendent of Godfrey-Lee Public Schools.

“This is just another step forward in making college access more readily available to students not only in our district but throughout the Wyoming area.”

Fast Track, a three-week boot camp for math and reading, also is going to be offered to students with low ACT scores that would require them to take remedial classes in college.

After finishing Fast Track classes, students will take a test called ACCUPLACER. If their scores have improved enough, it would allow them to test out of remedial classes.

Tolson said if a student is not college ready and needs to take remedial classes at GRCC, the student would have to pay for the classes but the credits would not go toward a degree. “This saves money for the student and gets him or her closer to a college degree,” he said of the ACCUPLACER test.

The benefits of Early College and Fast Track are many. School districts pay for the classes taken in high school, which means money saved for parents and students. Not having to take remedial classes means more savings.

Daniel Clark, dean of academic outreach for GRCC, said the savings could be anywhere from $500 to $3,000. The schools pay GRCC a special rate of $120 per credit. Credits earned will transfer to nearly all two- or four-year colleges or universities in Michigan.

Students won’t have to leave campus to take the classes, as GRCC instructors will come to the school.

“They’ve had limited access to dual enrollment in past years, but many have told us for now they want to remain on their high school campus while doing so,” Britten said.

Getting early college experience builds a student’s confidence, Clark said. “They are able to tell themselves that they successfully completed a college course.”

Students feel welcome in a district with ‘flags of every country’

Learning from an adopted Snowflake

‘Her passion is contagious’

Superintendent pinpoints funding needs during pandemic and beyond

Districts on the hunt for 3,000 missing students

School leaders have been working to find students who didn’t show up in the fall, make sure they’re being educated and maybe even persuade them to return...
Read more

Gauging the fallout from the pandemic on learning

While parents and educators use assessments to determine many kinds of student learning, a local researcher urges caution with testing from the pandemic year...
Read more
- Sponsorship -