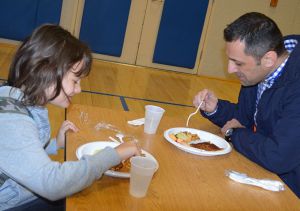 Challenger Elementary first-grade student Omar Aganovic thought about how it feels to have his father, Sanel Aganovic, with him at school for breakfast. Omar reached out to grab Sanel’s hand across the table.

Sanel smiled at his son.

“Usually I can’t because of work,” he said. “We eat breakfast together enough at home, but this brings another element to it.”

The line stretched out the door as fathers, alongside their children, arrived for the first-ever Fathers-Bring-Your-Child-to-School-Day. The district’s 10 elementary schools hosted fathers who ate with their children, listened to local standout athletes about how male role models impacted their lives, and attended class with their child.

The response was even bigger than anticipated, with more than 1,000 fathers attending. At Challenger Elementary, the food ran out because so many fathers attended.

Donta’ Young, behavior specialist at Challenger and Endeavor elementary schools, planned the event as a way to emphasize fathers’ role in shaping children’s lives academically, socially and with athletics.

Many students he works with who have behavioral problems do not have fathers involved in their lives, he said.

The Impact A Father Can Have

A 2006 study, “Fathers Influence in the Lives of Children with Adolescent Mothers,” involved 134 children over 10 years and showed children with involved fathers did better emotionally and academically, had fewer behavior problems, and scored higher on reading tests.

Other studies show students are more likely to do well in school, have healthy self-esteem, and avoid high-risk behaviors if they have involved loving fathers, Young said.

“If you can change the behavior, you can shape the culture,” Young said.

Challenger Principal Mark Bea said the school has a lot of involved fathers, which is great. However, mothers are usually the ones dropping students off, so inviting fathers was a great way to recognize their importance.

“You, by being here today, are showing you’re an involved dad,” he told the gymnasium full of fathers.

Fifteen college and professional athletes spoke for the event at the elementary schools.

Clemens, now a Kent County probations officer who works with juveniles, said many children he works with do not have fathers in their lives.

“I have 30 cases on my caseload and all I deal with is 29 moms and one dad,” he said. “I have to deal with children every day and when there are no male in their homes, the kids run rampant.”

He said his high school football coach was the first male role model in his life. The coach inspired him to think about college, and Clemens eventually got a scholarship to Grand Valley State University. Clemens went on to play arena football for several teams including the Grand Rapids Rampage. He played for the Seattle Seahawks and Jacksonville Jaguars.

“Never think your effect is not that strong because it is,” he said.

“The involvement of a dad in a kid’s life helps mold them into what they’re going to be,” he said. “They are going to be dad’s, husbands, outstanding citizens. We need to grab them before it’s too late.” 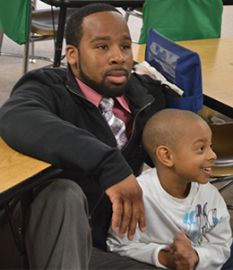 Over breakfast, father Tray Clopton chatted with his son Elijah, a third-grade student.

“It’s always nice to be able to participate in school functions. It builds morale, camaraderie, all of that,” Clopton said.

First-grade teacher Teressa Gatza said the event was a great experience for students.

“I had tears from a handful of students today, not because they didn’t have someone here, but because their dads were leaving,” she said. “We talked about what these tears meant and how it shows how much this experience meant to them. I changed what I was doing next in my lesson plans so they could make cards for their dads.  One kid said ‘I will always keep this memory in my heart.'”

Around the world in seven holidays