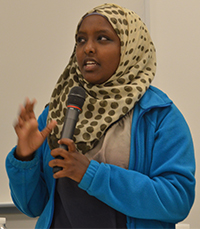 About 600 refugees from war-torn countries across the globe settle in Kent and Ottawa counties every year, and about half are children. One of them is Mohamed Ali, from Somalia, a seventh-grade student at Crestwood Middle School in Kentwood.

“I was scared,” Mohamed said. “I felt alone.” He came to the United States last year with his adult sister. “I had no one to talk to, but finally I found nice teachers and nice friends.”

Mohamed was the youngest student, and newest to Michigan, who answered questions about being a refugee attending local schools during the recent “Converging Paths” conference.

Workshops explored experiences of refugees from Burma, Africa, Bhutan and the Middle East. Topics included how to welcome newcomers, trauma and treatment in the classroom, human trafficking, parent engagement and cultural misunderstandings.

The student panel also included Ayan Mahdi, from Kenya, a freshman at Innovation Central High School in Grand Rapids; Vincent Msafiri, from Congo, a senior at East Kentwood High School; and Nashteha Feto, an East Kentwood junior whose parents immigrated from Ethiopia before she was born.

Students said they are here for better opportunities and education. Ayan plans to become a pediatrician. Vincent’s favorite class is physics, he speaks six languages and his parents never went to school. Mohamed is also interested in becoming a doctor, “but every eight months I’m changing. I have so many things in my head, I don’t know.”

Nashteha is interested in law and is working hard in school with her family in mind. “I want to grow up and help my parents so they won’t have to do the jobs they are doing now,” she said.

The students had words of advice and encouragement for new refugee students. Advised Ayan: “It gets better.”

“I tell them, ‘complete your work on time, do your work always, join a sport or activity. That’s the mystery of making friends,'” said Vincent, who plays soccer.

About 120 educators attended the conference, the first of its kind offered by the Kentwood-based non-profit organization. It provides refugee students and their families with academic support and youth development services to help them succeed in school.

“The goal is that ultimately they succeed in life and in long-term integration into our community,” said Susan Kragt, executive director of the West Michigan Refugee Education and Cultural Center. 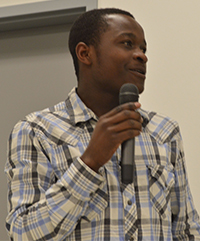 She said refugee students in local classrooms face challenges such as language barriers and cultural differences. They were forced to flee their countries, often leaving behind documentssuch as school records. Many students and families have experienced violence and trauma, and most are unfamiliar with education in the U.S. The conference aimed to help teachers build relationships with students and parents and create welcoming classrooms.

“Teachers have so many questions,” Kragt said. “It can be a very stressful thing to have students show up and you’re not sure how they got there and where they came from.”

The student panelists offered encouragement to other young refugees trying to make the transition to not just a new school, but a new way of life.

“Remember why you came here,” Nashteha Feto said. “Reach that goal. Don’t let anyone distract you from it.”