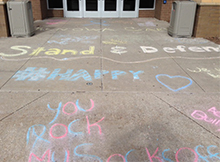 Walking down a hallway of Kenowa Hills High School, Karley Lynn Mead said not everyone sees the bullying that sometimes goes on in her school.

She does. As part of a student group called Knights Lights, she tries to stop it.

“We get people coming up to us saying, ‘You guys have saved my life. Thank you,'” said Karley, a junior.

But she grieves that no one saved Dillon, a friend of hers from Grand Rapids who committed suicide two years ago after suffering from bullying and depression. “I miss him like crazy,” she said.

The presentations made a powerful impact, Karley and others agree. But did they make a difference? Apart from consciousness-raising events like Teen Nation, are schools addressing the bullying problem day-to-day?

Officials at Kenowa Hills and some other districts say yes, and that their efforts are paying off.

“Our goal is not to go out there and get these bullies,” Poelstra said. “It’s to spread the effect of compassion and kindness and (show) the real damage this can cause.”

Teen Nation is among the more high-profile school initiatives to curb bullying. Another is Rachel’s Challenge, a response to the1999 Columbine High School massacre, which was presented to area students in November. And the Mental Health Foundation of West Michigan recently staged its third annual “Be Nice” flyover event, in which students spelled out that message on their campuses.

All Michigan school districts are required to have anti-bullying policies under Matt’s Safe School Law, adopted in 2011. Some have folded its provisions into more comprehensive programs. Northview High School requires accused bullies to watch student-generated videos of bullying’s consequences and write reflections about them.

Byron Center West Middle School hosted the Teen Nation event, turning the gym into an R&B concert as singers performed pop songs and spoke of their own experiences with bullying. While plans call for a follow-up event next year, it was just one part of an ongoing anti-bullying program, said Principal John Krajewski.

West Middle students earlier this year heard presentations from Kent County sheriff’s deputies and a State Police trooper, and an attorney spoke last year about cyber-bullying. School personnel meet with bullying victims to see how they are doing, as well as with accused bullies to discuss their behavior and encourage better decisions, Krajewski said.

Such efforts are needed to support the state law, he said, comparing it to the seatbelt law in that it “makes a lot of good common sense and helps protect our children from being victimized.”

“In general there’s a lot more awareness with our students,” Krajewski added.

Awareness has been heightened as well at North Rockford Middle School, which hosted both Teen Nation and Rachel’s Challenge. Administrators have built on the emotional impact of those events to try to create a kinder and more respectful school culture.

Following Rachel’s Challenge in November, student groups initiated monthly activities encouraging students to be kind to each other and remind them “we’re all here on the same team,” Weidenfeller said.

In the wake of Teen Nation, the school brought in Family Outreach Center workers to offer voluntary screenings to students. If questionnaires and interviews indicated students were struggling with depression or anxiety, their families were notified. About 20 percent of students took part, Weidenfeller said.

Under school policy, if one student accuses another of bullying, both are brought together to try to reach an agreement of mutual respect. Repeated instances of bullying can lead to discipline, including suspension.

“We may not like each other but we’re going to agree to have respect for each other: Those are the rules,” Weidenfeller said.

In the recent Teen Nation events, students saw even successful pop singers suffered some of the same bullying behavior that they have.

At Byron Center West Middle School, the teen performers told of their experiences on shows like The Voice and opening for headliners like the Jonas Brothers. But despite their successes, the artists spoke of going through school as outsiders who faced bullying because their interests weren’t mainstream.

Performer and songwriter Branden Mendoza said he decided to pursue music as an eighth-grader. His friends didn’t like that he was singing instead of playing football.

“They started making fun of my skinny jeans and long hair because I didn’t want to do what they wanted to do,” Mendoza said, encouraging students to pursue their interests and support others who wish to do the same. “Keep your heads up and follow your dream.”

“Take it from usartists,” performer Collin Kozola said of verbal bullying. “We’ve been through that and we’re still going through that.”

At Kenowa Hills, Karley Mead and her fellow Knights Lights built a week of activities around the event. They wrote encouraging messages on the sidewalk, created a paper chain of positive thoughts, wore blue as a sign of unity and recognized students from each grade as models of kindness and compassion. 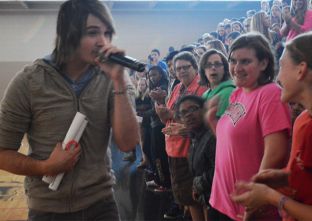 Karley has told other students about her friend Dillon, whose death, she said, has inspired her to “be the person he always said I could be.” Being part of Knights Lights has helped her overcome the hurt of bullying and be more open with others, she said.