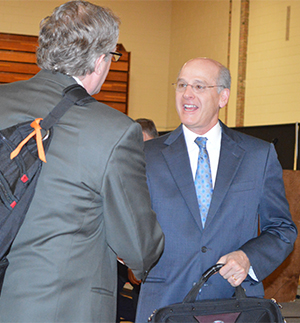 People who work in public education are the problem with schools today. They have cushy jobs and get the summers off. If school systems were run like a business, everything would be OK.

That’s the spiel businessman Jaime Vollmer delivered to audiences when he was a businessman 25 years ago. He changed his message after a teacher stood up at one of his speeches, gently explained to him why schools cannot operate like a business and got a wild round applause for her remarks.

She was right, Vollmer admits. “The solution of running public schools like a business is mindless,” he told school teachers, administrators, business leaders and the public recently during a three-day speaking blitz in the Grand Rapids area.

The public-education advocate spoke to more than 1,000 people during his visit sponsored by Kenowa Hills and Northview public schools, Kent ISD and Talent 2025.

Vollmer, the author of “Schools Cannot Do It Alone: Building Public Support for America’s Public Schools,” said uninformed thinking like his used to be is part of what holds public schools back from improving. He travels the country giving speeches and assuring teachers they are not the problem.

The inquiring teacher changed his life by asking him what his company, which made ice cream, would do if it got a delivery of bad blueberries for its product. He told her they’d send them back.

That’s the difference between schools and business, the teacher explained. “We can never send them back,” she said.

“She knew the truth, and it was obvious to her I didn’t know what I was talking about. Schools have no control over the raw product,” he said, pointing out they take students who are poor, rich, gifted, have ADHD, asthma and speak English as a second language. “Some kids take longer to learn than others.”

Grouping students according to age needs to be rethought, he added, especially when one child has been read to every night by his parents and another has never read a book.

“School favors a certain type of learners,” Vollmer said. “It’s a giant mass-production system for kids who fit the system.” 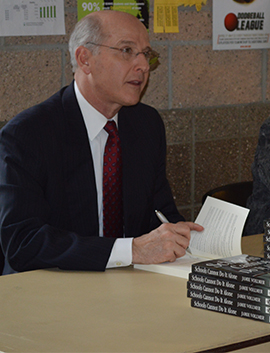 It’s About a Community

In 1985 Vollmer took a job in Iowa running the Great Midwestern Ice Cream Company. He later spent five years with the Iowa Business and Education Roundtable before leaving to form an education advocacy firm.

His 2010 book has become a centerpiece text of education reform, arguing schools need to make systemic changes with public support. His program “The Great Conversation” aims to foster that support by building understanding and trust between educators and the public.

Part of Vollmer’s solution for fixing schools is quite simple: People need to stop bad-mouthing schools and spreading negativity, like he was doing as a businessman.

The bashing — which comes not only from the public but teachers, administrators, business people and sometimes school board members — needs to stop because schools reflect the communities they serve.  “They need to tell the positive stories about schools,” he said.

Many community members have no idea what’s going on in schools, Vollmer said, noting 80 percent of taxpayers do not even have children attending school. Another statistic schools are up against, he said, is that “90 percent of school reform is based on the assumption you (teachers and educators) are the problem,” and too much is being decided by people not in education.

“The further a decision is made away from the child, the dumber the decision gets,” he said.

Despite the growing bevy of items, not a single minute has been added to the school calendar in six decades, Vollmer said, adding “no generation of teachers and administrators in history has had to fulfill this mandate” now demanded of public schools.

“If a child leaves the building without a diploma, we’ll wind up paying one way or another,” Vollmer said, whether it be taking care of them the rest of their lives with government support or living in fear because they are dangerous. “We must change what, when and how we teach to give all children maximum opportunity to thrive in a post-industrial society.” 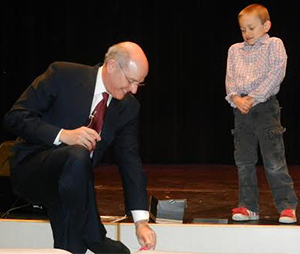 People need to do what the school teacher did after hearing him say schools just need to be run like a business, Vollmer told audiences.

“She could have said nothing,” he said. “Instead she stood up. It’s not always easy to do that.”

“The Ever Increasing Burden on American’s Public Schools”