She had similar words for senior Ben Gammon, a future film major at Huntington College, after viewing the music video he created for his final project.

“My dream is for you guys to be able to take stories and tell them visually,” she told them. “Art is everywhere and being able to tell a story visually will help you anywhere.”

Helping students hone their talents and watching them open up through film are among many things VanderLaan loves about her job. Her classroom becomes a world where her own creativity inspires students to turn film into art and tell stories.

VanderLaan’s ability to connect with students while developing a renowned audio-visual program recently was recognized when she was named Digital Arts Film and Television Teacher of the Year.

DAFT is a nonprofit educational organization that promotes media literacy through the creative use of film and video in Michigan. VanderLaan also received a Touchstone Award at the recent Michigan Youth Arts Festival, which showcases high school artistic talent.

She knows all her students well. She looked around her photo-editing classroom and pointed them out: There was Bret, “an old soul”; Ben, “musical to a T”; Luke Widner, “the special effects guy”; Becka Hammond, “the storyteller.” Through their projects she knows their families, friends, talents, joys and fears. “You learn everything about the kid,” she said.

VanderLaan has been teaching at Byron Center High School since 1998, playing a pivotal role in creating the film program. She now teaches television production, film editing, photojournalism, Foundation of Art, and the school’s highest-level art course, Artist Community, for juniors and seniors.

While the program has opened the door to careers for many students, VanderLaan took a while to find her own niche, switching her major at Grand Valley State University several times. During her junior year a counselor recommended a film theories class where her high aptitude for creativity would serve her well.

“That course changed my life. I took the one course and I was like, ‘It’s where I belong.'”

She graduated with a bachelor’s degree in film and television, specializing in writing for the media. She wrote and produced commercials in Detroit for two years before starting WCET, a public-access station servicing Hudsonville, Grandville and Jenison, which she ran for seven years.

She was recruited to start BCTV, Byron Center’s educational access television, which she still runs out of the high school. Two years after starting the station, she was asked to become certified in teaching.

She had never wanted to become a teacher.

“I said, ‘Are you kidding me?'” recalled VanderLaan, who has a master’s in career and technical education from Ferris State University. “However, I got in the classroom and I found my true love. It has been my honor to inspire all of these young students.”

VanderLaan rattles off the many success stories of her past students who have become directors, producers, animators and graphic designers. They include Chris Gill, lead videographer on the HBO video magazine “Vice”; Andrew Bardusk, a compositor (typesetter) who has worked on movies including “Blood Diamond” and the television show “Once Upon a Time”; and Andy Van Solkema, owner of Visualhero Design, a Grand Rapids-based design firm.

This year’s class figures to go far as well.

Senior Tyler Clifton is the first Byron Center student to win in two categories for Best of Show in the Michigan Student Film and Video Festival. He also won the award last year. Senior Jessica Hofman also won a Best of Show award in the festival and was a top three finalist for the Meijer Great Choices Film Festival.

Tyler, who has had VanderLaan as a teacher since his freshman year, plans to major in film at Michigan State University.

“She doesn’t really teach in a traditional way,” he said. “She’s very encouraging and she puts her ideas out there to see what you think about them. She’s good at making you problem-solve.”

VanderLaan and Greg Reinstein, an art and marketing teacher, refer to themselves as the “yin and yang” of the department — “Father Stein and Mother Hen,” Reinstein quipped. They work closely together to help students create professional-level pieces. Reinstein said VanderLaan stands out as a storyteller.

“Her media is audio-video,” Reinstein said. “It’s visual storytelling. That is her strength. She does a great job pulling thoughts and organizing kids’ thoughts in today’s cluttered world. Julie is a great person who takes this scattered thought process of our youth and puts it into a very professional package.” 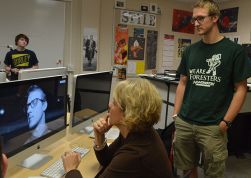 VanderLaan, of Hudsonville, and her husband, Scott, have two daughters, Kayla and Anna, who are students at Hudsonville High School. Filmmaking seems to run in the family: Both were top finalists in the Meijer Great Choices Film Festival.

DAFT Teacher of the Year award