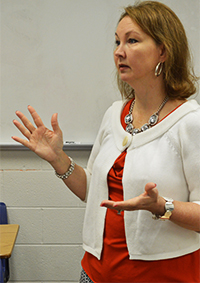 East Grand Rapids High School junior Elliott Vitaz walked into teacher Janice Yates’ classroom and shared his news. He is taking the “We the People: The Citizen & the Constitution” course next fall.

Yates shrieked and gave him a high five. “Yes! Yes! I’m so excited!” she said. “Good for you! You know you’re right for it!”

Yates had a new competitor for her always-impressive team, coached through the class, which competes in congressional hearing simulations judged by real judges and lawyers.

This teacher, who speaks with a barely discernible Southern accent and has a vast knowledge of U.S. government, turns students into civic leaders. East Grand Rapids is the reigning state champion and regularly places in the top 10 at national finals for The Center for Civic Education’s “We the People” program. The competition tests students’ knowledge on complex topics like the foundations of the American political system and the challenges of democracy today.

This year’s team finished sixth in the finals on the campus of George Mason University in Fairfax, Va. and in hearing rooms on Capitol Hill. Before that, they placed first among 12 teams at the state competition in Lansing.

Elliott Vitaz and the 37 other students taking next school year’s semester-long class are in for quite a ride, complete with emotional breakdowns, intense practice sessions, and the overwhelming feeling they are in over their heads.

But hard work will yield great rewards, Yates said. They will stand, poised, in front of lawyers and judges, providing mock testimony on topics they knew nothing about just months before.

Every year, she sees students’ transformation from having no frame of reference for U.S. government to being able to rattle off laws, policies, history and their effects over time. Getting them there is her passion.

“By the end, they’re fearless,” Yates said. “They can get in front of anybody and say anything and speak off the cuff because they’ve been through it all.”

Principal Jenny Fee notices the change in students as well.

“‘We the People’ is much more than a class or a competition; it is a way of life for our student participants,” Fee said. “Truly, Janice Yates changes students’ lives. Many transform from average academic performers going through the motions of school into highly focused and directed individuals with strong voices and an eye on the future.”

Yates has guided the team to many state championships and 11 national top 10 finishes in the 14 years she has taught. Their best finishes were fourth place, in 2002 and 2005.

“The team got really close and we learned a lot, not only about the Constitution but public speaking in general,” said team member Meredith Gillespie, a junior. “Mrs. Yates is definitely really passionate and cares about what we learn and how we present ourselves.” 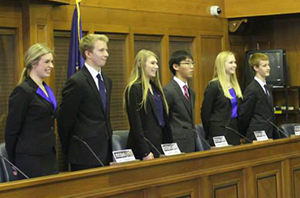 Students are Her Motivation

So what is it that propels Yates to take on a job that requires giving up Christmas break to practice, reassuring nervous students and parents, and fundraising up to $100,000 for a trip to the national finals?

Yates pulled out a thank-you note from a student. It said it all.

“You are the most inspirational person I have ever been lucky enough to meet,” it read. “You are so smart and kind and I know that you could be the president of the United States right now, but you are dedicating your life to teaching kids like me and I am more grateful for that than I can ever put into words because I know that thanks to you my life has been changed, no doubt for the better.”

Yates looked thoughtful. “This is why I keep doing it,” she said.

Yates, whose husband is Kent County Circuit Court Judge Christopher Yates, grew up in Georgia, where she graduated from the University of West Georgia. She received her master’s from Grand Valley State University. After moving to Michigan, she taught at Hudsonville High School, where she started a “We the People” team that finished second in the state for two years.

She was recruited to East Grand Rapids. Desiring to build the program there, she agreed to teach it for free, at first as a night elective class. She recruited her first team of 12, which went on to win the state competition and placed in the top 10 at nationals. “I just had such a talented group, because I really wasn’t that great of a teacher back then,” she said with a laugh.

The next year’s group of 15 placed fourth in the nation, and the rest is history.

For Any Student Up to the Challenge

Any junior or senior can take the class. It is a regular government course for the first nine weeks, including oral quizzes to get used to answering questions out loud. In October, the team starts meeting after school on weekends. Christmas break involves practice, practice, practice.

At first, a lot of information goes over the students’ heads. “I have to do a lot of calming down their nerves,” Yates said. “And their grades are really bad at first.”

That’s a difficult thing for students, many of whom are used to achieving straight A’s.

But the only grade that matters is the end, and by competition time they are ready. “They go from zero to 80 miles per hour,” she said.

Junior Mikey Roth said he learned more than he ever thought he would. “Mrs. Yates is very excited about what she does,” he said. “She’s a great teacher and she knows everything we need to know, and she prepares us really well for it.”