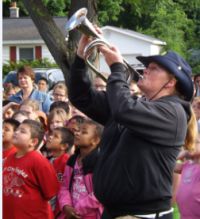 To the sound of U.S. Army Band song “Taps,” played on the bugle by American Legion auxiliary member Jen Moree, Kent City Elementary students looked on as local veterans led a flag-lowering ceremony in front of the school building.

The pre-kindergarten through 5th-grade students mark the beginning and end of the school year with a tribute to their country, thanks to local veterans from the Kent City American Legion Post 123 who lead official ceremonies to get the flag waving high in September, and then retire it properly with the lowering ceremony in June.

“I think there’s a fantastic sense of patriotism when students watch,” said Sara Schutt, administrative assistant at the school, noting that veterans introduced themselves and talked about their years of service.