Whether it was art or the history of war, you could count on a class taught by Scott Hazel to be fun and challenging. So says Darrick Liggett, who had the Cedar Springs High School teacher for both courses.

“He was an awesome teacher – so kind and open to everyone,” said Darrick, adding Hazel always welcomed students’ thoughts. “He would not give you an opinion on an art project until it was your own.

“Such a great influence,” Darrick added. “He walked with God.”

A man of deep faith, Hazel walked alongside many students in 20 years of teaching – and biked, hiked and camped with them, too. Many of them gathered this week to honor their well-loved teacher, who died July 23 after a swift but spirited battle with cancer. He was 55.

Hazel – known as Scotty to friends and family – was the kind of teacher who leaves a lasting influence on his students and colleagues, those who knew him agreed. His love of teaching and nurturing young people shone in everything he did, from teaching to coaching soccer to taking students on annual retreats to a Christian camp.

He once told a student, “Be somebody who makes everybody feel like somebody,” his sister Tammy Weissenborn recalled.

“I think that’s the motto he lived by,” she said, fighting tears. “He knew he had an opportunity to make a difference, and he spent his life making sure he did that.”

Hazel made a difference in many ways. A graduate of Flint Southwestern High School and Grand Valley State University, he taught history and art at Cedar Springs, and coached soccer there and at Rockford High School. A youth leader at Rockford Baptist Church, he took students on retreats to SpringHill Camps in Evart and bike trips to the Upper Peninsula.

He was also head cheerleader for Cedar Springs High School, where he organized Cedar Pride Week featuring games, prizes and a pep rally. Too ill to attend this year, he had fellow teacher Linda Tanis come to his house to make sure it was going well.

“I thought, ‘This is what this guy’s worried about right now,’” marveled Tanis. “He was a fantastic man. He just had that personality that he could connect with anyone. He genuinely loved kids.” He demonstrated that again by attending the Cedar Springs graduation this spring.

His love of students was part of his love for life, which he expressed in Renaissance-man fashion: as a painter, carpenter, a singer and drummer in his own band and author of an autobiography, “Looking Out Windows.” He relished having students experience “his love of nature and his love of the Lord,” said his brother, Jeff Morey.

Runningthrough it all was his strong faith, which he shared with students in before-school Bible studies. When a student came to him crying on his last day, he assured her everything would be OK. Said his sister Darcy Olson, “He did everything with his faith in mind.”

He also did everything with joy — cracking jokes with students, dancing ‘70s moves and crashing photos with goofy grins. His classes mixed a passion for teaching with a penchant for humor.

“He was really fun,” said Maddie Pekrul, who graduated this spring. “He created a relationship with you. He was like a friend to us and a teacher.”

Community Rallies behind Him

Hazel was diagnosed just before Thanksgiving with liposarcoma, a rare cancer of the body’s connective soft tissues. He had beaten an unrelated cancer once before, in 1991, but it was not to be this time. He was treated at the MD Anderson Cancer Center at the University of Texas before returning to his home in Rockford.

He passed away last week at his home surrounded by his family: his wife, Susan, and children Rebekah, Kaitlin and Cameron.

The difference Hazel made in students’ lives was evident from the support he and his family received from the school and community in his final months. They raised more than $25,000 for his medical expenses and organized a benefit basketball game featuring members of the Detroit Lions. A Facebook page called Purple Haze was set up on his behalf, gathering more than 1,900 members.

More than 100 people, including current and former students, posted tributes to him on Facebook. More than 650 packed the high school auditorium for his funeral Tuesday, July 29, and many came to a visitation in the cafeteria.

In January, when student Alex Hughes interviewed him for the school news station CSTV, Hazel expressed his gratitude for the support he had received. “It is certainly most humbling,” he said, choking up. “As gratefully as I can put it, thanks.”

His dedication impressed Alex Hughes, “knowing he had that much passion to make our school a better place, and to make kids feel they’re important and welcome and loved.” 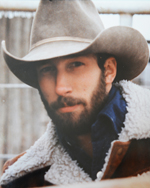 Though struggling with cancer then, Hazel led one last retreat to SpringHill Camps. In a lengthy Facebook post, Linda Tanis’ son Alex recounted Hazel feeling ill that weekend. He asked Alex to win him a championship in “broomball,” a hockey-like game with brooms. Alex’s team delivered the next day, then all the students prayed for their teacher.

“Scotty will never be forgotten,” Alex Tanis wrote. “His legacy lives on in our hearts and in our actions!”