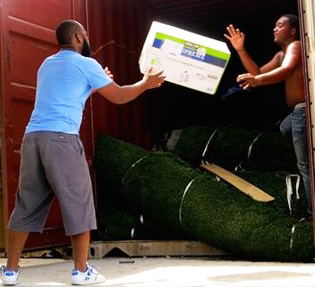 A bad storm that wrecked a high school football field turned out to be a blessing for an orphanage in Haiti.

Artificial turf that formerly covered the Northview High School stadium field has been installed on a new playground at God’s Littlest Angels, a non-profit Christian orphanage on a Haitian mountainside. The turf was lifted from the football field surface by a rain storm on Memorial Day 2010, resulting in new turf for the field. Part of the old turf was used for the school’s practice field but the rest sat in storage.

Meanwhile, Mark Augustyn, a Grand Rapids banker who had adopted his 7-year-old son Grady from the orphanage following the 2010 Haiti earthquake, learned the group needed playground turf for a new orphanage he had helped build. Augustyn and Tom Vanderwell, another West Michigan resident and orphanage board member, put out local feelers to fill the need.

That led them to Grand Rapids Christian Schools, which donated surplus pellets that helped cushion their new turf, and to Northview, which donated its leftover turf. Augustyn then contacted his friend Tom Jasper, owner of the Andy J. Egan Co. mechanical contracting firm, who agreed to haul away the turf and cut its roughly 15,000 square feet into 10-foot rolls, all at no cost. The rolls were shipped to Haiti along with a separate donation of some 57,000 diapers from around the country.

The turf arrived in late July and was hauled up the mountain to God’s Littlest Angels, where workers sewed the pieces back together.  The turf is now installed and awaits the arrival of toddlers to the new facility late this year.

Augustyn said he was pleased by the generosity of the schools and people of West Michigan and how it will benefit Haitian children.

“Having been there a couple of times, you realize kids are kids, whether they’re in Haiti or in Grand Rapids,” Augustyn said. “To see them be loved and be given things to make their life better, it brings a lot of joy to a lot of people.”