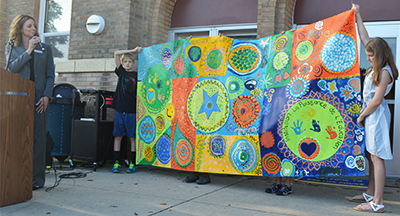 A mural that has traveled thousands of miles to unite children in East Grand Rapids and Haiti will have a prominent location for this month’s ArtPrize competition.

Created by 550 students at Breton Downs and the school in Haiti, the mural, titled “If Everyone Does a Little,” is one of more than 1,500 pieces in the competition. It was selected by Courtyard Marriott representatives from more than 1,000 artists who sought a location at the venue.

With ArtPrize running Sept. 24 to Oct. 12, the 5-by-10-foot painted canvas will be on display, framed with self-portraits and photos of the students along with their personal quotes, beginning Sept. 21 at the hotel, 11 Monroe Ave. NW.

“When we saw the unique inspiration behind it, that’s what really drew us to it,” said Jennifer Cutter, Courtyard by Marriott general manager.

Something Bigger Than Themselves

Students started the painting two years ago and completed it last school year through Breton Downs’ ongoing partnership with the local non-profit, The Power of Education Foundation.

“It started as a way to connect the two schools with something they can do together. Every child loves art,” said Jen Masternak, schools partnership program director for the foundation.

The four-year-old organization founded Institution La Puissance de L’Education in October 2011. It has grown from an enrollment of 90 first- through third-graders to 215 kindergarten through seventh-grade students this year.

The art project actually involved two canvas murals. Breton Downs students put a base coat of paint on one, and Masternak brought both to Haiti in November 2012. Haitian students created the mural on the canvas that EGR students had started, and put a base coat on the other blank one, which EGR students later designed.

“We wanted to show students that they have the power to have a big impact even if they can only do a little bit,” Masternak said. “Each student just had to add one little design, not paint the whole canvas.

“This supports one of the lessons they learn through the service learning projects they do throughout the year: You don’t have to come up with the entire solution to a big problem like childhood hunger, global education inequality or lack of clean water; you just need to get involved and contribute what you can.”

Fifth-grader Ellie Sheridan said she added little dots and lines to the piece. “It’s exciting,” Ellie said. “I think it’s really cool that we worked with kids in Haiti. There probably isn’t another piece like it in ArtPrize.”

Fifth-grader Molly Green learned something else as well: “It’s not how far away you live; you can still be friends.”

“Color, pattern, and design easily cross cultural barriers and all students felt comfortable participating at their own level,” DenDulk said. “The finished piece is a bold example of how art can unite people, even those separated by so many differences. I am happy both schools have a reminder that we can work together to create beautiful things.”

Breton Downs’ relationship with the Port-au-Prince school will continue. Last year, they talked with students via Skype, adopted a child per classroom and hosted several fundraisers.

Masternak leads lessons at Breton Downs several times each year and visits Haiti every six months. EGR students have studied issues including access to clean water. Masternak challenged them to carry 20-pound buckets of water, half the weight of what children in Haiti have to bring to their families in order to have clean water.

But the most important thing she emphasizes is that children are very much alike no matter where they live.

“Kids like to play; kids want to learn; kids need to be healthy; kids need food,” Masternak said. “All the basics of being a kid are the same no matter where they are born. But the availability of education, or nutrition or clean water sometimes is dependent on when you are born.” 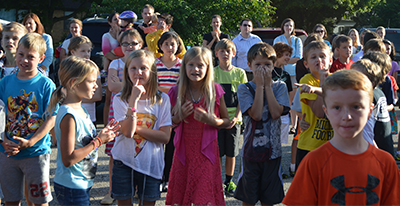 The Haitian students cherish their mural, she added: “It’s beautiful. For a lot of the kids it was the first time they had painted.”

The Power of Education Foundation

The Power of Education Foundation Blog

Quiz Bowl team headed to nationals for second time ever