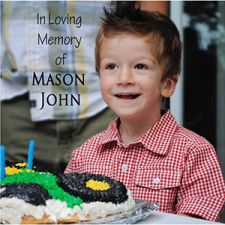 It had been several years after losing their son, Mason John, unexpectedly. Parents Nicole and Ryan Kober decided it was time to host a community fundraising event in his memory. Initially conceived as a humble get together for family and close friends, the recent Mason’s Day for Play spiraled into a full-blown carnival game, bounce house, fish pond, and fire truck extravaganza that raised $14,415 for Sparta Area School’s Early Childhood Special Education (ECSE) program, which Mason attended.

“They really care about their students. These teachers make such a difference,” said Nicole about the ECSE program. Ryan added, “We’re really happy with the help the children received. We saw major changes (with Mason). He was so excited about going to school, he would clap his hands.”

“We hoped they would buy things that would have benefitted Mason,” said Nicole, who worked with program administrators to determine how to use the money. She explained that Mason was capable of using the iPads to communicate in ways he couldn’t verbally. This wasn’t the first time the Kobers raised money for the program. At Mason’s memorial in 2011 they raised enough to buy a swing set and iPads for students to use for communication in class. This year they plan to expand the playground further.

Parent Caitlin Anderson was quite surprised when her son Leo, an ECSE student, said, “I want to go to that every year.” Anderson explained that Leo is usually shy around large groups of people, but on this day he had a great time

playing with everyone. Many students in the ECSE program were among the couple hundred children and family members participating in Mason’s Day for Play, which was planned just for them. Nicole said when organizing the event she just wanted it to be “A place where kids can be kids.”

The Kobers’ generosity was much appreciated. At a recent Board of Education meeting they were recognized, and received a standing ovation, as well as many hugs and a few tears, from a room full of ECSE staffand community members.

Mason’s teacher Susan Varga said she really missed having Mason in class and that he brought joy to everyone who came in contact with him. “He was so excited about everything. Excited about life,” She said.

In reflection on Mason’s impact on her life, Nicole said, “He opened my eyes into living, never taking anything for granted. To appreciate things like wind in my hair. He makes me want to be a better person.”

A new place for kiddos to play, learn and grow

No robotics team? No problem