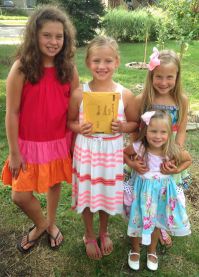 When Reese Hurley decided to raise money to support a cause by having a lemonade stand, she rounded up her schoolmates, set up a table in her driveway and devoted two full summer days to the effort.

The result– with some help from her savvy mom, Julie Hurley– Reese and friends Aubrey Grutter and Alexa Deising raised nearly $800 for Well House, a Grand Rapids organization that provides safe, affordable housing for formerly homeless people. The $150 raised from the lemonade stand continued to grow after the girls closed shop, thanks to social media and word-of-mouth.

While the Marshall Elementary students, who live in the same neighborhood, peddled their lemonade for 50 cents a cup, they received many larger donations after explaining their cause.

Reese and Aubrey, second-graders, and Alexa, a fourth-grader, explained how they yelled “Well House!” to passersby and talked about their mission.

It all started one day in July when Reese told her mother she wanted to have a lemonade stand. Julie Hurley helped her find a cause to support. Reese had earlier noticed a man on a street holding a sign that said he was homeless and needed help, which inspired her to choose Well House.

She said she hopes money raised can be spent on new doors and windows at the Well House homes.

“It felt pretty good,” Reese said of donating the money. “They get new stuff, like windows and doors.”

The total raised from the stand was about $150. Reese’s mom Julie Hurley spread the word on Facebook and started a GoFundMe site. The Grand Rapids Community Foundation matched the $64 the girls raised on the first day. They got the attention of Byron Center Public Schools Superintendent Dan Takens, who also made a donation. 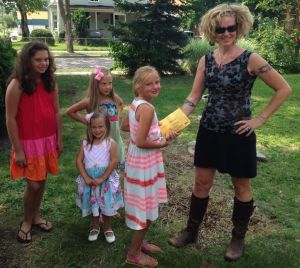 The girls presented the money to Well House executive director Tami VandenBerg, who gave them a tour of the houses. Well House has helped more than 5,000 people out of homelessness since 1977. People rent rooms in three houses on Cass Avenue SE, for as long as they wish, at an affordable rent.

Marshall Elementary School Principal Chris Ruiter said he plans to recognize the girls at an assembly for showing great character.