Derek Brandon is saving our country from the evil plans of Admiral Ironsides in his latest movie, “The Adventures of Mickey Matson and The Pirate’s Code.”

The Thornapple Kellogg sophomore was home this summer, spending lots of time with friends. He also has been enjoying the school year, which he wasn’t able to do his freshman year because of filming.

Derek is an actor who co-starred in the 2012 movie, “The Adventures of Mickey Matson and the Copperhead Treasure.” He began acting in Grand Rapids Civic Theatre productions as a child, later in films shot by area colleges and is a member of the Screen Actors Guild. (Read more about his acting career in the School News Network story linked below.)

Over this summer, he spent two weeks training other actors at an event in Chicago and was a guest speaker at Compass Film Academy in Grand Rapids. He is taking a few weeks away from school this month to act in “Rodeo Girl,” which is being shot in West Michigan and stars Kevin Sorbo (“God’s Not Dead,” “Hercules”). He’s also on the junior varsity soccer team and plans to try out for the basketball team next month. Trying to keep up with school and other activities “will be pretty crazy,” Derek said. 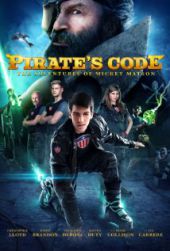 Derek plans to start studying to test out of high school so he can act in bigger films. He still plans to attend Thornapple Kellogg High School, though, where he can be a regular student.

His new film brings several big Hollywood stars to its Oct. 16 premiere in Grand Rapids while raising money for the Grand Rapids Public Museum. The timing for the release coincides with the museum’s exhibit opening Oct. 18, “Real Pirates: The Untold Story of the Whydah from Slave Ship to Pirate Ship.” Stars scheduled to appear at the red-carpet event include Christopher Lloyd, Frank Collison, Tia Carrere, Disney’s Kenton Duty, Nickelodeon’s Savannah Jade and Francesca DeRosa. Sophie Bolen of Cascade Township is also in the movie.

The film, the second in a trilogy that started with “The Adventures of Mickey Matson and the Copperhead Treasure.” is also raising money for the Helen DeVos Children’s Hospital. If you see it at any Celebration Cinema in Grand Rapids during the first two weeks after the premiere, proceeds from tickets sold will go to the hospital.

“We really want to get the word out to pack the theaters those few weeks,” said Shannon Brandon, Derek’s mom. Children at the hospital also will get to see a special showing the day of the premiere and meet the stars.