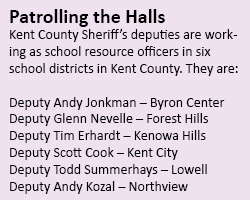 When Deputy Tim Erhardt was patrolling roads for the Kent County Sheriff’s Department, he responded one weekend to four fatal car crashes. Three of them involved students 16 years old or younger.

“That was a weekend that still sticks in my head,” Erhardt recalled soberly in his office at Kenowa Hills High School.

As the new school resource officer for Kenowa Hills Public Schools, Erhardt says he will do whatever it takes to protect students and promote safety. He began his duties this fall after the district school board approved his position to help enhance security in all six school buildings.

Erhardt said he takes his new role extremely seriously, whether talking to elementary classes about “stranger danger,” responding to student injuries or, in the unlikely event of an armed attacker, being prepared to defend students.

“The reality is there’s 1,100-plus kids in the (high) school,” Erhardt said on a recent afternoon. “I’m not going to know all of them by name. But if something like that happened, I would sacrifice myself for every one of them.”

“It was really clear that although the Kent County Sheriff’s Department provided a very timely response (in the past), it was very reactionary,” Hopkins said. “They were always reacting to a need we had. We felt a better solution was to have a school resource officer on site, so that instead of being reactionary it’s proactive, and relationships can be developed.”

Erhardt is one of six sheriff’s deputies stationed at Kent County public schools this fall. Northview and Forest Hills previously had school resource officers on staff. Byron Center, Kent City and Lowell added them this fall along with Kenowa Hills.

“We’ve talked to many school districts over the years, and there was always interest in having a position” on school staff, Kok said. “It always came back to the finances of it. It got to the point where we really felt it was important to get these positions established in schools and do proactive prevention.”

In Kenowa Hills, the position evolved from a school security audit taken in 2013 by the sheriff’s department and Walker police. In addition to structural improvements such as front door buzz-in systems, police recommended a school resource officer.

That review was followed by a study last fall of how often the middle and high schools contacted law enforcement. It found police were called 37 times in 36 days, resulting in 13 visits by police – most of which could have been handled by a school resource officer, Hopkins said.

Although tragedies such as the Sandy Hook school shootings have heightened security concerns, Erhardt’s hiring is “not intended to be the solution to that,” Hopkins said. Rather, Erhardt provides “an extra set of eyes and ears, and (to) be seen by our students as a safe person to contact if they feel their safety or security is being threatened.”

Erhardt may wear a badge and a gun, but he’s a soft-spoken man who once wanted to be an accountant. Working in business changed his mind on that, and he fell in love with police work at Grand Rapids Community College. He has been an officer for 17 years, arresting drunk drivers and investigating crash scenes before coming to Kenowa Hills this fall.

He has spent much of his time talking to students, whether speaking in classes or informally counseling teens with problems. He observes building safety drills and lockdowns. You’ll see him at football games and in the lunch room. He has helped organize safe driving events, including a “Celebrate My Drive” campaign students recently began.

He considers much of his job to be about helping students feel comfortable with police. He started a program called KOPS – kids operating positively at school – where he issues tickets to students for doing something good. Their names go into a weekly drawing that earns winners some goodies and a ride around school grounds in his patrol car.

“Most kids think cops are good people, but there are a fair number who grow up in an atmosphere (where) they don’t like police,” Erhardt said. “I want them to realize, hey, I’m a good guy. I just happen to wear a uniform.”

But he is a law enforcement officer first and foremost. He keeps an eye on hallways with monitors at his desk. A radio plugged into his ear notifies him of emergencies. He’s responded to calls such as an injured middle schooler and an elementary student who seemed to be running away from school.

He also has investigated potentially criminal cases, including improper use of social media and an alleged Internet scam, and has helped break up the occasional fight.

“Our number one concern is providing a safe learning environment for kids, and he definitely enhances that,” Smith said.

Strategic plan takes input from all, including ‘critical friends’