Students Send Out Care Packages of Comfort on ‘Thoughtful Thursdays’ 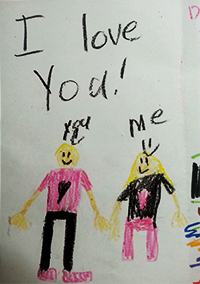 It has been a tough year for Linda Rairigh, ever since she was diagnosed with melanoma lung cancer at the end of June. It was both dreadful and baffling news for a woman who never smoked and had regular skin cancer checkups. For weeks afterward, she said, she was “an emotional and physical wreck.”

Then in late October she opened her mail to find something that touched her heart: 28 hand-colored cards bearing words of encouragement from the children of Zinser Elementary School. They came from Julie Hughes’ second-grade class, where Rairigh’s granddaughter Hannah is a student. Hannah’s mother, Delia Bush, is a teacher at Alpine Elementary.

Some cards were addressed to “Grandma Linda” or “Hannah’s grandma.” Stars, suns, a rainbow and a jack-o-lantern greeted her in bright pinks and purples. “I rele rele rele rele want you to feel betr by the way Happy Hallwen,” one student wrote.

“I was so pleased,” Rairigh said later. “I cried a little, smiled a lot and felt very grateful for all of my children, grandchildren and the children in Mrs. Hughes’ class.”

The outpouring of comfort was part of an ongoing activity by Hughes’ class. Every Thursday they pick someone in need of cheering up and send cards to them. It’s called Thoughtful Thursday.

Teacher Julie Hughes said she got the idea from another teacher in Walled Lake, and that her students have been touched by other people’s lives through the project.

The first person the class reached out to was a boy battling cancer. After watching a news feature about him by TV reporter Maranda, students talked about what his life might be like and “how we could bring some sunshine to his day,” Hughes said.

Others who students have written to include a firefighter whose leg had to be amputated, a toddler recovering from complications of a tonsillectomy, and an air traffic controller assigned to Afghanistan. A monthly newsletter keeps parents informed and asks for other people to comfort during the yearlong project. 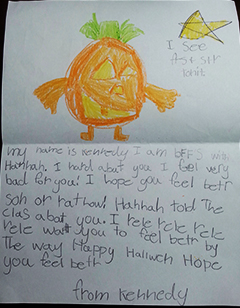 Besides improving students’ writing skills, Hughes said, “They are learning how their words can hopefully make a positive impact on someone’s day. The goal is to just let someone know that we are thinking about them. We don’t expect anything in return.”

For Linda Rairigh, who is being treated at Spectrum Health, it was a Thoughtful Thursday indeed. She called it “a great program and a wonderful lesson for the kids to learn.” She sent the class a thank-you note and a treat in reply.

“It can’t possibly make them as happy as their cards made me,” she said.