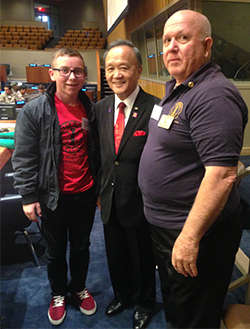 The United Nations is not exactly new to Hayden Sutton. For the past two years he has competed in Model U.N., taking part in simulated government debates and twice taking first place in the international academic program.

So when he spoke to the actual United Nations recently, the Lowell High School junior told the hundreds of dignitaries on hand that he was “relatively accustomed to the atmosphere of this assembly today.”

Be that as it may, Hayden later admitted, he did have a slight case of nerves when he spoke to the U.N. General Assembly on behalf of Lowell Interact, a student club affiliated with Rotary International. He was chosen to address the group on the U.N.’s annual Rotary Day.

“It was awesome,” Hayden said a few days after his Nov. 1 address.  “I met a lot of really cool people. It was amazing.”

But … this was the U.N.! Wasn’t it nerve-wracking to stand in front of all those ambassadors with their translator headphones on?

“You get up there and you get the initial stare from everybody, and that made me a little nervous,” conceded Hayden. “But after that I was fine. It was cool.”

So was Hayden, apparently.

His experience in public speaking and student government were key reasons he was asked to speak by R.J. Boudro, Lowell High School counselor and Interact adviser. A regional Rotary official approached Boudro about recruiting a speaker after being impressed with the work of Lowell Interact. The club has grown to 86 members since being founded six years ago.

“He does a really good job of talking about this community and this school,” Boudro said. “He got to go talk about one of the biggest reasons people love our community” – the caring services that are provided by students and adults alike.

The son of James and Darla Sutton, Hayden told the U.N. about the many giving activities of Interact and Lowell at large. These included pitching in to a community clean-up day and scarecrow-making fundraiser, the annual Pink Arrow fundraiser for cancer patients and the yearly “food fight” collecting donations for Flat River Outreach Ministries.

“If my small community … was able to provide 9,000 food items, just imagine what you could do in your respective communities,” Hayden said in his 12-minute speech. “Together, if enough similar efforts were strung together, we could eventually eradicate world hunger altogether.”

In his day-long session at the U.N., Hayden met Rotary International President Gary C.K. Huang and listened to speeches by two Interact students from New Hampshire. Apart from that, he got a whirlwind tour on his first visit to New York City with regional Rotary officer Doug Mealey, seeing the Empire State Building, Ground Zero and the Statue of Liberty. He also saw some “crazy costumes” walking through Times Square on Halloween and legions of runners warming up for the New York City Marathon.

“It was a busy weekend in N.Y.C.,” Hayden quipped.

He has plenty to keep him busy at home, too: He is president of the National Honor Society, Student Council treasurer and a member of the Science Olympiad team. He came to enjoy community service by helping his grandfather, William Sutton, a member of the Lions Club. He is grateful Rotary chose him to speak to the U.N.

“It gave me a different perspective on what I want to do, and I was able to share the story of Lowell with other people, which was pretty great.”