Teacher of the Year Shows Students the Impact Art Can Have 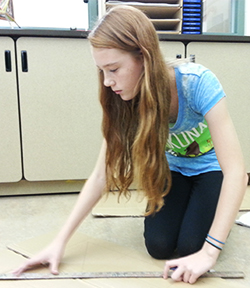 In Janine Campbell’s Byron Center West Middle School art classroom, a student molded clay into masks; another created a cardboard tree from aluminum; others painted and sketched or created digital art on laptops.

Instead of being bound by project guidelines, students were leading their own creative processes. Campbell challenged them to take the theme, “Environment, Spaces and Places,” and convey a message using whatever medium they choose.

“They are given the theme and concept and can interpret it in their own way,” said Campbell, a nine-year teacher at West Middle School.

Student Dalton VanderArk was busy creating a metallic piece of faux foliage. “It’s a tree that represents how the world is becoming more and more metal, more unnatural,” he said.

Campbell, who is involved in implementingnew national art teaching standards, brings an enlightened perspective to the classroom, and her shift away from traditional methods proves you can’t paint school art programs with a broad brush.

two other Michigan art teachers for her work with students and teachers.

Outside the classroom, Campbell has served as the MAEA digital editor, has presented at regional and national conferences, and recently spoke on new art standards created by the National Coalition for Core Art Standard to a national audience.

Not Just a Pretty Picture

With her students, Campbell focuses on getting them to delve deep as artists. She teaches the process that goes into creating art with meaning.

“Pretty pictures are nice, but if you can make a beautiful image that also has an impact emotionally because it means something to you, that is more significant,” Campbell said.

Ideas can be found everywhere, she said.

“My goal with my students is I want them to notice things that go unnoticed, which is a life skill,” Campbell said. “Every day you pass by the same room or take the same route to work. I want to to get them to slow down, be observant, and find inspiration in those everyday moments that don’t always go noticed.”

Art can merge creativity and problem-solving perfectly, she explained.

“One thing art does for kids is it offers them the opportunity to think, to slow down and to investigate. That’s something I want my students to come away with: the ability to think of meaningful questions and innovative solutions,” she said.

Eighth-grader Anna Pavlak worked on a large-scale three-dimensional cardboard piece. She said she wasn’t interested in art until she was in Campbell’s class, but now she’s won awards. She also attends the after-school art class that Campbell started.

“She’s really good at explaining how to do things. She’s very encouraging and motivating,” Anna said.

Campbell graduated from The University of Michigan-Flint and Western Michigan University. She has also taught as adjunct faculty for Kendall College of Art and Design of Ferris State University and Western Michigan University. She was also named a 2014 PBS Learning Media Digital Innovator. Her classroom received a second place award for the use of educational technology in the 2011 PBS Innovation Awards, and first place for the 2013 STEAMed Innovator Awards. 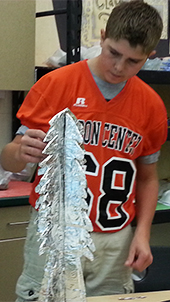 Putting Themselves ‘Out There’

Another huge focus of Campbell’s is bringing art outside the school walls. Each year, she helps students nab awards from many competitions, and they post thousands of pieces on the online gallery Artsonia.

Last year, Byron Center’s seventh- through 12th-grade program was the moat award-winning program in Kent County and third in the region for the Scholastic Art and Writing Awards contest. Mackenzie Reid, now a freshman, won a national silver medal in the contest, placing her among the top 1 percent of about 230,000 pieces of work submitted to the program. She received her award at Carnegie Hall, in New York City.

Campbell last year selected five student pieces to enter into the regional MAEA show, all were selected and four advance to the state. Two were named in the top 15 for the state of Michigan. Top 15 placers were Sara Thompson and Morgan Baker.

“I don’t know what my program would be if we didn’t put ourselves out there. Another thing I want my students to walk away with is the confidence to take a positive risk. With art, you are making the invisible visible. You’re taking ideas and putting them so someone else can see into the pathway of your brain, which can be scary,” Campbell said.

But students’ work goes even broader than into contests, she said. “The kids know that whatever they are doing it’s not just for me. What they do matters and it has an impact on the world.”