Poverty Persists Out in the Country, Out of Sight

Nine-year-old Marisol is doing handstands and 16-year-old Rocio makes a peanut butter sandwich as their mother describes her dreams for them.

“I want them to be self-sufficient,” Flossie Bliss says of her daughters, who also include Gloria, 13, and Stephanie, 15.

Her dreams are like those of many parents. But as Bliss speaks, the challenges poverty poses for her Cedar Springs family are all too evident.

She is sitting on a plastic lawn chair, one of two that comprise the living-room furniture of her mobile home. She is wrapped in a coat against the cold overpowering a small space heater, her gas heat having been shut off for lack of payment. The November weather seeps in through two broken bedroom windows and a crack around the door.

From this two-bedroom residence in a mobile-home park north of town, the 41-year-old single mother works daily to dig herself out of debt and provide a better life for her kids. She has a full-time job, but her $10 an hour doesn’t come close to covering lot rent, a car payment, utility bills and food and clothing for her family.

Food stamps and Medicaid help, but she’s behind on payments and has no usable beds. At the moment, she said, she and the girls were sleeping on the floor.

This is the face of rural poverty in Kent County. Cedar Springs may not make the news as often as poor urban school districts. But parents like Bliss can tell you the going is just as tough out in the country – more so, in some ways. (see series on Poverty: A Backpack of Heartache)

Although the problems of poor rural families are similar to those living in urban areas, their access to help is not. For parents of school children in Cedar Springs, Kent City and other rural districts, it is a long ways to the abundant medical and social services in Grand Rapids.

Their remote locations can make it harder for people in the country to deal with poverty than for those in the city, said Marybeth Mattingly, director of research on vulnerable families at the University of New Hampshire’s Carsey School of Public Policy.

“A lot of times the challenges are the same (in rural and urban areas), but the solutions are different,” Mattingly said.  “When you’re poor in rural America, you’re much more isolated.”

For instance, while many city dwellers can take public transportation to work, “in rural America, to hold down a job it’s pretty much a necessity you have a car,” she said. But having a car that runs — or even owning one — is a challenge for many families.

“The needs are so much greater often in the rural areas, because there aren’t the service providers. They’re this island amongst themselves,” said Carol Paine-McGovern, executive director of the Kent School Services Network. The agency brings counseling, medical and other services to 29 schools in eight Kent County school districts and specialty schools of the Kent ISD.

In Cedar Springs, a KSSN staffer has been working to support Flossie and her children, including finding her beds and getting the heat turned back on.

“My hope is by supporting Flossie and helping her not to have an emergency every time she turns around, she can focus on being the best parent in supporting her kids in their learning and academic success,” said Jodi West, a school community coordinator. 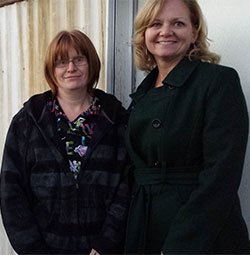 Many Families Knocked out of Middle Class

In West Michigan, as elsewhere, poverty is by no means confined to the urban centers (see related story). Although school districts in Grand Rapids and Wyoming have the most students qualifying for free or reduced lunch, nearly half or more qualify as well in Cedar Springs, Kent City, Kenowa Hills and Sparta.

Among the 16.1 million American children in poverty, a good number live in out-of-the-way houses, trailers and apartments — sometimes doubled up with other poor families — in the rural reaches of Kent County. They are largely invisible to the public. But Claire Guisfredi sees them every day.

She is executive director of North Kent Community Services, an outpost of aid for needy families in northern Kent County. It serves nearly 2,000 families yearly with everything from food and clothing to help paying utilities and classes on budgeting.

Many are the working poor. Some are caught in generations of poverty. Others have been knocked out of the middleclass by divorce, a health crisis or an employer that moved away. One lost job or unexpected expense can set off a cascade of disaster.

“They come in for food because their propane bills are so high,” said Guisfredi. “They used to have good jobs that paid a lot of money. Now people are making $10 an hour.”

James Tousley knows that story. He made $14.50 an hour at the Electrolux refrigerator plant in Greenville before it closed in 2006, taking with it 2,700 jobs. Now he makes $9.95 at an electrical contractor plant.

He was at the center recently shopping for clothes and books with his fiancée, Tanya Stevenson, and her 9-year-old daughter, Christina. Between utilities and nearly $700 a month to rent a trailer, he needed a little help.

“I was living comfortably. I was making ends meet” while at Electrolux, Tousley said. Now, “I have just barely enough to put food on my table and clothes on my kid’s back.”

The center has provided clothing, shoes and backpacks for Christina, who attends school in Cedar Springs. The family had signed up for a Christmas basket and Toys for Tots, but Christina wants to donate old toys to a needy family, Tousley said. “She’s gotten (help), but she’s learned the concept of giving back.”

Helping Hands Brought to the Schools

North Kent is partners with Kent School Services Network in Cedar Springs, which provides help for low-income families like Flossie Bliss and her daughters. KSSN refers parents to North Kent for courses on financial planning and to other agencies for assistance. Students receive dental services, vision and hearing screenings at their schools. They also get help for problems with anxiety and depression, and families receive counseling from mental-health clinicians.

Bliss said counseling has helped unify family. “If I go in with a question or concern with the kids, they immediately find ways to help me,” she said of KSSN.

Her needs are many, complicated and interlocking. Some of her children contend with attention-deficit disorder and mental-health issues, Bliss said, while she fights health problems and chronic depression. Daily life is stressful. She leaves by 5 a.m. to go to her job as a nurse’s assistant at the Grand Rapids Home for Veterans. She recently bought a used car but has trouble keeping up with the twice-monthly payments as well as utility bills. 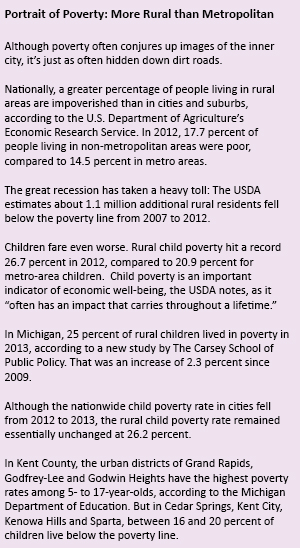 “The biggest challenge is trying to balance the budget and doing what the kids want to do, and trying to keep a car going, and trying to make time for church,” she said. “I rarely get to church.”

Hope Amid the Struggle

Church is important to her and her daughters, who have participated in national youth group events. So is the American Legion Auxiliary, in which they are active and where daughter Stephanie works.

Then there is the upkeep of her home at Cedar Springs Mobile Estates. She needs to have repairs made, get the heat turned back on and find a couch and beds. Having grown up in a transient, impoverished family, she doesn’t want her daughters trapped in a similar situation.

Jodi West, the KSSN staffer in Cedar Springs, said her long-term goal is to help Bliss find confidence in her own strengths. “The biggest thing with Flossie and many parents is just empowering them. We’re all trying to be the best mom we can be, regardless of income.”

Bliss said she wants to help her daughters succeed in life. She is proud of their progress and accomplishments in school. But she also wants them to know the importance of helping others.

“You can’t receive help without giving back,” she said. “If you’re going to always take, you’re never going to get ahead.”

SNN Series, The Burden of Poverty: A Backpack of Heartache

Child poverty rate declines nationally, but not in rural areas