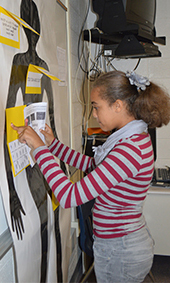 The suspects left puzzle pieces: footprints and fingerprints around the bodies outside the Slater-Morrill Shoe Company.

East Kentwood Freshman Campus students eyed the evidence in their classroom-turned-crime scene, where profiles of suspects covered the walls. Examining the data, they considered, “Were Sacco and Vanzetti guilty?”

By dissecting details in the week-long whodunit, they would make their own conclusions. “When I was looking at the ‘left thumb’ it matched with Suspect 4,” said freshman Hope Welch, inspecting fingerprints.

The students reopened the 1920 case of Nicola Sacco and Bartolomeo Vanzetti, Italian-born anarchists convicted of murdering two men during the armed robbery of a shoe factory in Braintree, Mass. They duo was executed despite conflicting evidence, a prejudicial pre-trial statement by the jury foreman, and a confession by an alleged participant in the robbery.

Students entered information, like footprint measurements, into a computer program that plotted the data. They created an equation and interpreted graphs to to narrow down their suspect field. They transcribed DNA into RNA and translated RNA into amino acids.

Possible suspects were teachers and administrators, who even had their bodies traced to make outlines at the scene.

In the midst of sleuthing, freshman Moniqua Curry consider the facts she had compiled.

“It gets my brain working,” said Moniqua. “It makes me feel accomplished when I match a protein strand or fingerprint. Suspect One seems kind of suspicious.”

With clues laid out before them, students used modern-day methods on the 90-year-old case. The cross-curricular lesson merged algebraic equations and DNA profiling with facts from the true case. Students wrote reports on their findings, but because they weren’t rewriting history, the answer wasn’t cut and dry.

Including all subjects into one lesson “helps students understand all of it better,” DeRuiter said. “We all work together and everything works together.”

“Students were were not just learning the information but applying their knowledge and skills,” Oostindie added. “It helps them to make the connection that the ideas learned in one class can be applied in others.” 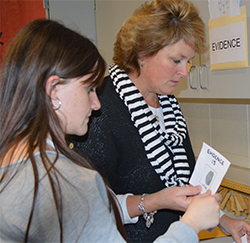 “To hear them say learning is fun is incredibly awesome,” she said.