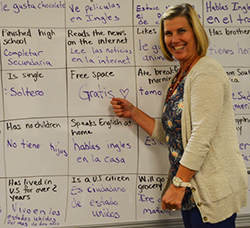 Isabel Pineda read “out,” “up”, “is,” and “have” with her second-grade daughter, Yazmin, from a list of early-elementary-level reading words. But Isabel wasn’t just helping Yazmin; she was learning to speak English.

They study the alphabet and commonly used words and phrases, read online children’s books and play vocabulary games. They practice simple conversations, learn to make appointments and fill out job applications. “It gives them hope,” Tummelson said. “They can deal with their daily lives better with some English. It gives them more confidence as well.”

The district has offered the program for five years, with about 30 parents graduating from each 10-week session. This year, two sessions are planned.

In Kelloggsville, 447 students or 21 percent of the district’s enrollment, are non-native English speakers, The Parent Education Program’s focus is removing barriers to serve families, including communication and fear.

“Imagine a child coming home and the teacher’s expectation is to do homework, and the directions are in English. It might be just, ‘Circle the right answer,’ but if they don’t know the word ‘circle’, they can’t help their child,” Cobb said.

Not knowing how to help is often compounded by being too afraid to ask. Many parents lack the confidence to get involved at their child’s school because of poor English. Also, many come from countries where parent involvement in school is not the norm.

“It is one of my goals to increase parent involvement, but it is hard because they are afraid. They don’t want to be embarrassed,” Cobb said.

For some parents, English has proven difficult for years. Many have lived in the United States for years, and some are second-generation Americans, but never learned the language. Most are Spanish-speaking and some are Vietnamese and Italian.

Margarita Contreras and her husband, Alberto Ronzon, are attending the class for the second year in a row. They’ve lived in Michigan for 16 years, but Ronzon said they postponed English lessons for a long time.

“It is necessary to speak English for work,” said Contreras. “I like coming here. I’m busy but I want to take the time to learn.”

They said they are learning to better help their children, fifth-grader Bruno and second-grader Andrea, with schoolwork and to get involved at school. In Mexico, they only had contact with teachers if “it was bad news.”

Alberto said he wishes the program was even more than once a week.

“I need to understand and speak English, to try to learn,” he said.

Cobb makes parents promise to do just that: try to use the English skills they practice in class.

She said one parent who had gone through the program was visiting the school office and became frustrated when trying to ask a question in English. She took a deep breath and kept trying until she was understood.

“Results are families feel more in tuned with the district and they feel like they have more of a voice,” Cobb said.

Having families like Ronzon and Contreras eager to come into the school building is critical, said Tammy Savage, Kelloggsville’s director of instruction.

“Making those school-to-home connections gives another layer to developing foundational skills. The more we do with the parents that are here, so they know what they do to help their kids, the better it is all around, for everyone,” Savage said. “I’ve definitely seen benefits of this. Our parents, once we remove the barriers of school being a scary place, feel comfortable coming into the buildings and reaching out to teachers and staff. I think this district is very community-centered.”

Learning with their Children

Parents are learning with the same materials children use during the school day including the Zoophonics curriculum and interactive e-books. Kindergarten- and first-grade level materials help them learn basic English. Cobb said, while getting them in touch with their children’s education.

“We wanted a connection between what the parents are learning at school,” Cobb said. “Then the children are learning alongside them.”

A chunk of the class is spent reading on computers, while the children do crafts with volunteers. After an hour, they join together. During the recent class, teachers introduced sequencing in writing, sentences that begin with “first, next, then and last.”

Parents listened as Cobb spoke. “We are going to learn tonight something your kids learn in school,” she began.