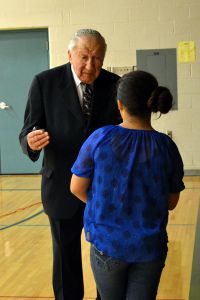 “I hope that once I explain to you what that word really means, you may never want to say it again, because hate hurts.

But remember love heals,” said the German-born Jewish man who spent 12 years as a child living under the Nazi regime. He worked in six slave labor camps during World War II.

“I know what hate means because I went through it,” he said. “I saw the devil, maybe not in person, but I saw the way he was acting and reacting. Remember that. When I say hate, I know.”

Nearly 70 years have passed since 86-year-old Lowenberg and other Jewish survivors were freed. Lowenberg was 17-years-old and weighed just 76 pounds when the war ended and he was liberated in 1945 into Malmo, Sweden.

Beginning at age 5, Lowenberg lived in a world where anti-Semitism was part of society and government policy. All his freedoms, including attending school, were stripped because of his religion. His family could not afford to moveout of Germany, but his sister, Berta, and and brother, Hans, escaped to Palestine. His sister, Margot, was able to immigrate to the United States with another family.

He and his sister, Eva, survived the concentration camps, but his parents, Sally and Klara, and twin brothers, Fritz and Kurt did not.

Lowenberg was born in Schenklengsfeld, Germany. When he was 5-years-old Hitler came into power. Townsfolk held meeting to promote prejudice; newspapers referred to Jews as bloodsuckers, liars and thieves.  Benches were posted with signs that read “for Aryans only,” and soldiers blocked stores so Jews couldn’t enter.

“They called me names. They abused me. They hated me. They tortured me. Why? I couldn’t ride a bicycle. I couldn’t have a toy. I had nothing. I was deprived of so much. Why?”

With chilling recollection of events that led to being forced into a Latvian ghetto and then to concentration camps, he told Mill Creek Middle School students how hate overtook his hometown. A teacher, in celebrating Hitler’s birthday, ordered a group of boys to beat him up until he lay crying on the floor. The teacher then pushed him against a board covered with nails. He was 8 years old.

“Nobody would sell anything to us anymore,” he said.

On Nov. 9, 1938, the “Night of Broken Glass,” Lowenberg was in class when rocks shattered the windows. Outside, Jews were being dragged in the streets. Across Germany, Jewish businesses were trashed, dozens of Jewish people were killed, and Jewish cemeteries, hospitals, schools, and homes were looted while police and fire brigades stood by.

“Nobody stood in the way. Nobody said don’t do this, because the government said do it,” he said.

Then, on Dec. 8, 1941, the day after the bombing of Pearl Harbor,  Jews were ordered to pack small suitcases to be “resettled.” Lowenberg and his family were pushed inside cattle cars, forced to travel standing up with no food or water for four days and four nights to Riga, Lativa, where they were moved into a ghetto to work like slaves, and survived on rotten food and snow.

But the worst was yet to come. All people ages 15 to 50 were eventually rounded up and sent to work camps. At age 15, Lowenberg  said goodbye to his parents and 9-year-old brothers Fritz and Kurt, who were sent to the extermination camp, Auschwitz. He still hopes his twin brothers escaped the hands “The Butcher of  Auschwitz,” Dr. Josef Mengele, who performed horrible experiments on more than 300 twins.

“I never, ever saw them again. That was the last goodbye,” Lowenberg said. “I only hope that my two little brothers went right to the gas chamber with my parents and the others, but I will never know.”

But Lowenberg was strong enough to work, and spent days toiling under cruel officers’ orders, sleeping just three hours a night on wooden slates and living on watery soup.

Sharing His Story So Holocaust is Never Forgotten

Lowenberg said he speaks about his experiences, while many survivors choose not to, so they are never forgotten. He told students they need to realize how lucky they are.

“Enjoy life to the utmost, believe me you are very lucky. I wish I would have been able to go to a school like this.”

He said he wants them to realize hate destroys life. 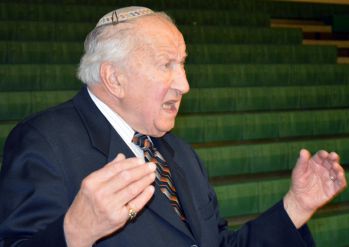 Lowenberg moved to the United States in 1946 and settled in Ohio. He moved to Michigan for a job opportunity in 1964. He worked in the retail women’s clothing industry and as a linen company’s sales representative and was vice-president of Continental Textile Corp of America. A resident of Southfield, Lowenberg and his wife, Carol, have three daughters and 14 grandchildren.