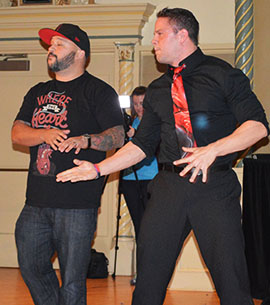 Kelloggville High School student Danira Stanojevic had an interesting experience listening to her classmates respond to the film “Tough Guise: Violence, Media and the Crisis of Masculinity.”

The film, by anti-violence educator Jackson Katz, argues that the epidemic of male violence in American society needs to be understood and addressed as part of a much larger cultural crisis in masculinity.

Danira heard students react  to the film with disbelief during The Mosaic Film Experience, a three-year-old event at Wealthy Theatre in Grand Rapids.

“I could tell everything they were saying in the film was true because everyone around me in the crowd was saying, ‘That’s not true,’ while acting in ways that the film said they would act,” Danira said. “I thought that was really ironic.”

Danira was responding as event organizers hoped: as a critical consumer of media. Grand Rapids Public Schools and Kelloggville high school students recently attended film-viewing sessions during which they considered media influence on their lives, the effect of good storytelling and how to become critical viewers.

Founded by local businessman Skot Welch in 2012, The Mosaic Film Experience is a student-film festival as well as an educational experience. This year, 750 films were submitted from 46 countries. Welch and other coordinators hope to have Kent County students enter next year’s event.

“The goal of Mosaic is not so much that everybody in the audience becomes a filmmaker, but we do think it’s important for people to be able to communicate better,” Welch said. “And even if it’s not about making a film, it encourages them to be able to tell their own story better.

“I look at film as an educational platform for young people to show their gifts and abilities. To make a film you have to traverse the educational landscape.”

‘It’s All About Media Literacy’

“I think it’s all about media literacy,” Baechler said. “Students need to be aware of how things in the media impact their perceptions and the way they live their lives.”

Students also watched “Mestizo” by Talon Gonzalez, which features multi-ethnic individuals expressing the complexity of identity when confronted with the question, “What are you?”

The educational workshop preceded a two-day schedule of public film viewing, an animation workshop and awards to local filmmakers.

Filmmakers were awarded thousands of dollars in prizes. They included entries from all over the world. High school films came from South Korea, Netherlands, Canada and the United States.

High school and college filmmakers can submit their work to next year’s festival.