A Cut Above: Student Films Connect to Peers, Schools through Meijer Great Choices 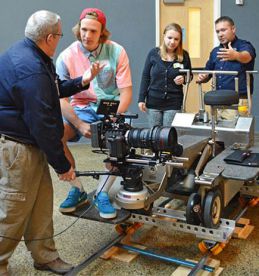 It’s a red-carpet affair, a celebration of student film-making, and a way novice directors can offer their perspectives on issues that touch their lives: character, health and diversity.

Since 2009, Meijer Great Choices Student Film Festival has grown to become a contest in which hundreds of high school students annually vie for more than $21,000 in prizes provided by big-name donors, culminating in an awards ceremony at Celebration Cinema North movie theater. Now, even kindergarten through eighth graders pick up cameras to enter the Film Festival Junior.

“It’s a big deal,” said Joana Leatherman, director of the Van Singel Fine Arts Center at Byron Center High School, where the festival has been coordinated since its inception. “Filmmaking is in everything now. There’s such a need for it in so many ways.The film festival has taken that into consideration to guide the students down the right path (to college and careers).”

A Place to Showcase Talent

The festival was the brainchild of Joyce Bower, former marketing and communications director for the Van Singel Fine Arts Center at Byron Center High School. As part of her job, Bower reviewed scholarship applications to the Van Singel Family Foundation based on their artistic work. She noticed the high-quality submissions by Byron Center film students with no venue to show their work.

So, Bower began to set things in motion for a statewide festival, which would showcase the talent being developed in the High School’s Audio Visual Program, and in other schools as well.

With content guidelines based on themes geared around school-related issues, it could have impact on all ages, she realized.

“We thought, ‘Why don’t we control it and make it about what school’s are focusing in on? All schools are trying to teach the pillars of character, doing diversity training all the time, and teaching healthy living.”

Entries are judged by a panel of college students, and dozens of winners take home Meijer and Apple gift cards ranging from $75 to $1,500 and trophies. The first year, 90 students entered the contest, a number that quadrupled in 2010 to 385 students and remains more than 300 each year.

Bower worked hard to get corporate support, which led to Meijer signing on as underwriter. Rumor has it, late supermarket mogul Frederik Meijer loved watching the films, she said. Other partners include Gerald R. Ford Presidential Foundation and Chemical Bank, and the Vander Laan Family Foundation. The Loeks family donates the theater, staffing and space for the awards ceremony.

Leatherman said the festival is constantly working to stay fresh. Popularity and options in film-making have exploded because of more accessible technology, like smart phones. “You can have an iPhone, go down the street and tell a great story, and it’s viral a couple days later,” she said.

Meijer Great Choices helps put those options into a streamlined, positive venue, she said. “It’s a great opportunity to find out what students have to do to have a career in the field,” she said.

Involving Students of All Ages, Including College

Byron Center High School Audio Visual teacher Julie VanderLaan said the contest inspires many students. “I believe that the Meijer Great Choices Film Festival is an outstanding program that allows all students to get involved. The high school students make the videos, the college students critique the videos and the K-12 students get the opportunity to view them and also learn from them,” she said.

“Students are taught to think about their ‘target audience’, their ‘message’ and how to make an individual take action.This takes learning to a deeper level, so it becomes much more than just another video contest.”

Byron Center High School senior StefaniMerchant’s film last year, with the topic of embracing oneself as an individual, finished in the Top 10.  The budding filmmaker hopes to place in the Top 3 this year.

She said the competition has given her inspiration, and exposed her to a wealth of creativity and ideas. It’s also taught her to be concise with her message. “I think a public service announcement is really unique. You have to get your story line across in 30 seconds,” she said. “It’s a cool challenge and its fun to do it.”

Last year, representatives of Compass College of Cinematic Arts, based in Grand Rapids, welcomed contest winners to a question and answer session to expose them to careers in film-making, use high-tech equipment and to Skype with a famous film director.

This year, following the June 9 awards ceremony, winners will be whisked to Compass College in limousines for a Red Carpet After party.

Copies of DVDs featuring student films are distributed to every school in Michigan each year. “The schools are given something at no charge to help them with character, healthy lifestyle and diversity lessons,” Bower said.

Bower calls the festival, made possible with the help of the entire Van Singel team and community support, “the greatest accomplishment of her career. She believes it has opened many people’s eyes to the possibilities in film. “It’s brought it out into the open. People now know their are jobs and careers in film. I think Meijer Great Choices was at the start of that,” she said.

Registration deadline is Feb. 15 for this year’s festival. Films submissions will identify a problem and show the solution that leads to a Great Choice concerning diversity, heath or character.