Students Take to the Air with New Radio Station 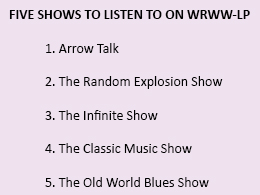 Connor Smithee got hooked on radio in sixth grade. All it took was reading the weather report with Tommy Dylan and Brook Taylor on Star 105.7.

“It was awesome,” recalled Connor, now a sophomore, about being on-air guest of the longtime Grand Rapids DJs.

Now Connor is the man behind the mic as a host of “Arrow Talk,” a community talk show on the new Lowell High School radio station, WRWW-LP 92.3 FM. The low-power station recently began broadcasting as part of a district effort to connect with the community while giving students more media experience.

Equipped with a 100-watt license from the Federal Communications Commission, the station also airs other student talk shows, farm and sports reports, movie reviews and a steady stream of student-selected music.  It adds FM waves to the district’s pre-existing Internet radio station, which also covers school sports events and concerts.

“The kids get that hands-on life experience, which is the best thing you can do for kids,” Behm said. “They get to use all the skills we want them to learn to be career- and college-ready.”

For Connor and about two dozen other students, WRWW is a chance to be part of a medium they love while honing skills for the future.

“I love doing this,” said Connor, who would like to be a meteorologist. “I like being on the air and getting to interact with the community.”

Freshman Roman Rozell, aka “Roman the Showman,” hosts a weekly talk show called “Kids These Days.” For someone interested in teaching and communications technology, having his own show is unbeatable.

“I’ve always loved listening to the radio,” Roman said. “I always thought it would be cool to be the person choosing what music to play.”

Connor and Roman are among 27 students – all but two of them boys – who work at the station after school, on evenings and weekends. They don’t receive academic credit but get plenty of experience. Several students work behind the scenes as technicians, setting up equipment and monitoring the controls.

They operate out of a snug studio converted from a former office next to the high school performing arts center. The station was outfitted with FM transmitting equipment this year thanks to an $18,500 grant from the city of Lowell’s cable TV endowment fund. The transmitter reaches as far as East Grand Rapids and Ionia.

Navigating the grant and FCC license came compliments of Al Eckman, the volunteer station manager. A retired Lowell police officer and school security director, Eckman also helped organize the school Internet station about nine years ago. As a longtime ham radio operator, he had the know-how to help students branch into FM.

“I’ve always enjoyed working with young adults,” said Eckman, 72. “I thought it would be kind of neat if students had an opportunity to learn about wireless technology. It escalated from there.”

The station escalated quickly once the FCC granted a license Oct. 20. A station centerpiece is “Arrow Talk,” designed to bring in guests on topics of community interest. Airing at 10 a.m. Saturdays, and available anytime by podcast, the first show featured Courtney Cheers, director of the  Wittenbach/Wege Agriscience and Environmental Education Center.

A week later, Connor Smithee’s guests were Superintendent Greg Pratt and Transportation Director Carol Hamilton to talk about how they decide whether to close school on snowy days.

While Connor sat behind a microphone, Dakota Krzysik worked a laptop to monitor sound levels and record the interview for podcast. Both a technician and DJ, Dakota designed the station Website and currently hosts the “No-Topic Show,” which is just what it sounds like.

“When you’re on the radio, people actually listen,” Dakota said. “You can talk about the stupidest things and people listen.”

The seconds ticked down to broadcast, then Connor spoke into the mike. “All right everybody,” he said, drawing out the “all” in familiar DJ fashion. “Good morning, and welcome to this week’s edition of ‘Arrow Talk.’” Then, clutching two pages of questions, he launched into the interview: “How and when do they decide to cancel school?”

For the next 24 minutes, he asked Pratt and Hamilton about everything from how they determine road conditions to whether the district keeps a list of dirt roads like the one he lives on, moving smoothly from one topic to the next.

Interview over, he thanked station sponsors and previewed upcoming shows, including a live remote from the Ada Lowell 5 theater. Then he made way for sophomore Mitchell Brown, aka “Mickey,” to spin his favorite tunes for 90 minutes.

Afterward, Connor said he’d done much better than on his first show. “There was a ton of stuff to talk about,” he added. “I think it went really well.”