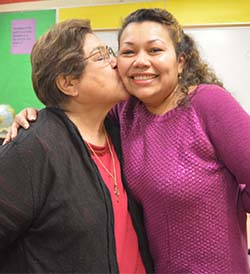 The community liaison for Hispanic families, Tummelson simultaneously serves as educator, translator, counselor and advocate for students and parents whose voices otherwise may go unheard. Standing shy of 5 feet tall, Tummelson is known among colleagues as a spitfire and a force, and parents look to her for direction.

“She’s the most important for us,”  said Vilma Gonzalez, a mother of three who first met Tummelson when her oldest daughter started preschool. Gonzalez, from Guatemala, learned English by attending the district’s English language program for non-English-speaking parents, which Tummelson helps teach. “She’s always happy and makes us laugh.”

Indeed, it’s Tummelson whom Gonzalez and other Hispanic parents call, often about things they won’t ask any other administrator. Said Gonzalez, “She makes me feel comfortable, especially when I feel nervous, and my tongue freezes and I can’t say anything in English.”

Tummelson began her job in 2009 in the tight-knit district where 21 percent of students are English language learners. She has since established herself as the go-to person for Hispanic parents. She blends compassion with common sense spiced with humor and honesty, putting people at ease.

“I’ve been in their shoes. I know what it’s like,” said Tummelson, who remembers the anxiety of starting school after moving from Bolivia at age 12. “I think that’s what makes me most effective with them.

“Whoever said coming to this country would be easy is wrong. It’s way too hard.”

Understanding to be Understood

Tummelson’s ability to relate to Latino families surpasses even her bilingual fluency in making her an invaluable partner for Hispanic parents. Many families aren’t aware of the requirements their children face in school. They come from countries where education is considered a privilege often inaccessible to the poor, and a call from a teacher means trouble. School is not viewed as a welcoming place.

“We think school should be a happy place,” she said. “We think of it as a right. It’s not necessarily a right where they come from.”

But with persistence, Tummelson works hard to change perceptions and build bonds between families and schools. It takes hard work, she said, but barriers can weaken and eventually vanish.

“That’s the beauty of being in this school district,” she added. “It’s small enough that kids don’t fall in the cracks.” Tummelson’s presence is reassuring to many parents at Southeast Elementary School, said Principal Paula Dykstra.

“With the families in my building, when they see her they break out in smiles and it’s like a sigh of relief: Here’s someone who understands and someone who knows us,” Dykstra  said. “There’s always big hugs and kisses.”

It’s a typical Thursday. From her Kelloggsville Middle School office located in an old paper closet, decorated with a small Bolivian flag and a poster of Snoopy that says “Friends are worth  their weight in chocolate chip cookies,” Tummelson takes call after call from parents. Issues span concerns from school to applying for jobs.

These are the same parents who won’t return a call from any other teacher.

Throughout the day, Tummelson will have numerous conversations, meet with parents, serve as a translator between them and teachers, and attend an after-school “Coffee with the Community” event at Southeast Elementary. But right now she takes phone calls. Some require her to be a strong intermediary.

One is from Kelloggsville English language teacher Susan Faulk, concerning a pregnant high school student who ran away from home and left her mother distraught. An illegal immigrant, the mother was afraid to notify the police. Instead, she called Tummelson, which led to Tummelson serving as a counselor and mediator between mother and daughter over the course of the semester.

“I got good news from Mary (not the student’s real name),” Tummelson told Faulk. “She said her grades went up. I am so glad. That is cool. She is doing it it for the baby. That’s thanks to you. Look at the effort you put in.”

Excited about Mary’s hard-won turnaround — she has improved her grade-point average from below a 2.0 to a 2.98 — Faulk and Tummelson planned to meet with the student’s mother to tell her about the progress.

“She’s on task; she’s doing it; she’s focused. That’s what we wanted for her,” Tummelson said.

Another conversation is even more positive. A senior wants to meet with Tummelson to discuss her options for next year following graduation. Yet another is from a mother who needs help writing her children’s sizes and requests in English for Christmas gifts.

Time and again, the phone rings.

Later, over coffee, parents tell Tummelson they’re nervous about their fifth-graders starting middle school in a much bigger building next year. A tour is quickly planned.

A Conduit That Otherwise Would Be Missing

Tummelson provides a road map Hispanic parents understand. She is well aware of their cultural barriers and lack of knowledge about U.S. education. From her, advice like “learn English so you know what your child is up to,” “don’t take your child’s word when they say they are doing fantastic at school,” and “attendance matters” begins to sink in.

“I will leave a message (for a parent) and they won’t call me back, but with her they will,” Farkas added. “And, if they don’t, Virginia will call them two or three times. She doesn’t give up.”

If they do avoid her, she makes home visits, banana bread in hand, until parents welcome her.

“It’s not all roses and cream,” Tummelson admitted.

She recalled once following a school bus to convince a mother to allow her son to go on a field trip to the state capitol, after previous attempts failed. After reassurance from Tummelson and other teachers that the child, who uses a wheelchair, should go, he went on the trip with his father.

“They had a great time,” Tummelson.

Tummelson’s level of energy is a bit mystifying, especially when she calls teaching her “retirement career.” She got her second master’s degree to become a teacher in 1998 from Olivet Nazarene University in  Bourbonnais, Ill., following a career in food service management. She received her bachelor’s degree in 1978 and first master’s in 1980 from Wayne State University. She taught Spanish, history and civics to middle school students in Illinois for eight years before moving to Grand Rapids to be close to her granddaughter, Salina, now 13.

The eldest of three children, Tummelson is no stranger to culture shock — though her background is different from many immigrants. In Bolivia, her family was wealthy and she was being groomed to be a high-society woman. Her household was run by a cook, nannies and a butler.

But after her father, a doctor, spoke against the government when it turned communist, the family fled to the United States. They faced a new reality where every family member had to work. Her father took a job as a hospital orderly until he could receive his license to practice medicine in the U.S.

Lower economic status meant the family had to cook for itself. Tummelson’s mother bought a five-pound bag of rice, and, not knowing how much it would expand, cooked it all at once. Shocked when it overflowed, the family didn’t know what to do with the billowing rice and moved it all to the bathtub. After that, her mother only dared cook a half-cup at a time, which wasn’t enough for everyone, Tummelson recalled with a laugh.

Tummelson married at age 17 and had two sons. Her husband of 52 years died last February. 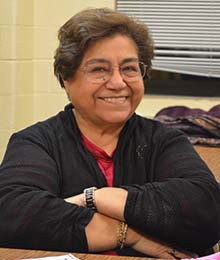 Tummelson walked into Kelloggsville Middle School in 2008 to inquire about substitute teaching. Principal Tim Reeves said it was soon evident she could fill a bigger role. Her ability to connect with people makes her the perfect liaison, he said.

“That’s what she does and she does it well,” Reeves said. “Because of her experience and age, they see her as that mother-like figure. They are able to make a connection of trust. They trust that what she is telling them is correct. She’s someone that has experience in life.”

Her impact touches academics, discipline and parenting. She likes to hear the student’s side of the story first, then talk to the parents.“They tell me stuff they don’t tell their parents,” she said, noting she keeps their secrets unless it is harmful to the child or anyone else.

She gives parents rides if they don’t understand the bus system, and brings them to the library, food pantry or to get clothing. Many just want someone to understand them. “A lot of times it’s a shoulder they need, encouragement and hope. I like to think I give them hope.”

Home to School Coordinator Gladys Townsend said Tummelson goes above and beyond every day. “She’s just an awesome, genuine person. She doesn’t have to do all the things she does. There aren’t enough words to express her caring and concern.”

Her colleagues say they’d clone her many times if they could. But Tummelson insisted she’s just doing her job.“I just do what I’m supposed to do. I’m good at what I do because I get help from everyone else. We are doing it for the kids.”

It is the goal of many an educator, she said: “You’re there to help them, and with God’s grace, you do.”